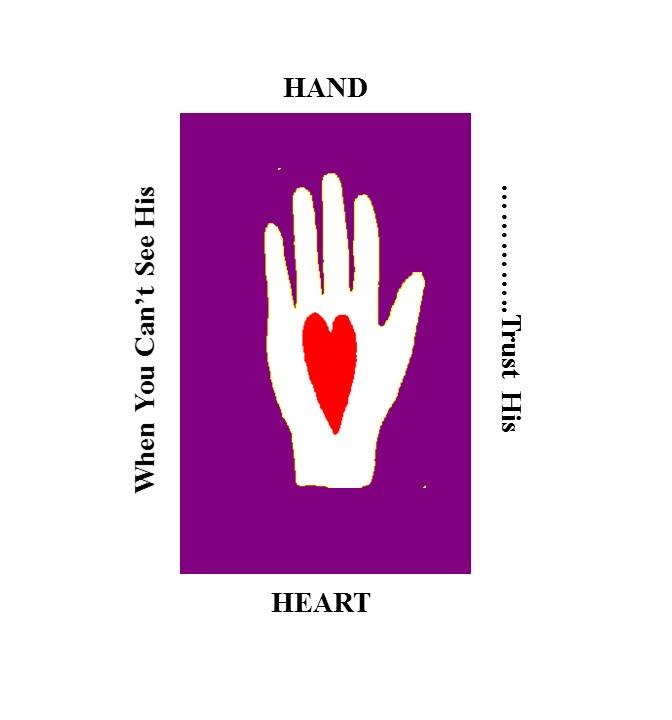 Close friends know about my collection of hands…ceramic, glass, porcelain, wood, etc. It began with a Babbie Mason song from the early ‘90’s, “Trust His Heart” that has this line: “When you can’t trace His hand, trust His heart.” They have represented for me the invisible hands of God working on my behalf even when I was unaware of it and with each addition to the collection of hands the call to trust God more is reaffirmed. The theme of trust and an image that derived from that song became sort of a “life” theme and logo for me. Interestingly, too, I discovered that the ancient Boyd family crest is a hand raised in a gesture of pledge and has the word ‘confido’ underneath, which is Latin for “I trust.”

Occasionally something finds its way into my hand that lets me know that God is present in my thoughts, associations, passions, experiences, and progressive spiritual journey in ways I could never anticipate, but can only observe and stand in awe of when God chooses to show me.

Such is the case this week. I had been given several boxes of books a few months ago that belonged to a friend’s father, who was a pastor of mine in the past and is now deceased. I began sorting them yesterday and deciding which I wished to keep to use for reference or reading and which would be helpful at Titus 2 for our students.
There was one thin little paperback volume from 1979, published from a series of Lenten sermons, entitled “A Cross-Study of Hands” by John Thomas Randolph. It is a little jewel for one with an interest in hands. In it, Randolph explores the use of, emotional expressions revealed by, and actions of the hands of people present at the crucifixion of Christ…..

– Pilate’s refusal of responsibility by washing his hands and pointing his finger at others
– Those in the crowd whose hands waved high in hosanna, then became fists raised in hostility
– The curious bystanders who folded their hands in an uninvolved “wait and see” attitude
– Those who pointed fingers in accusation
– The women who ministered to Jesus with hands motivated by love and devotion, and
– The nailed hands of Jesus

The book is small and explores only a few of the hands that were present that day and what they communicate to us. There were others.

– The bound hands of the thieves, one who experienced freedom and eternal life, the other one who experienced only further bondage even in death
– Joseph of Arimathea who came with compassionate, faithful, open, and generous hands who dutifully removed Christ’s body from the cross and gave the best he had to honor Christ in death
– The fishermen whose calloused hands returned to fishing in their brokenhearted grief and disillusionment
– The wringing hands of Judas in despair asking himself, “What have I done?” and “What can I do now?”
– The Beloved Apostle John, whose hand rested upon the shoulder of Jesus’ Mother and helped her up, holding her elbow, perhaps, as Jesus entrusted her to John’s care

Hands have been important representations in Christian tradition. Strong’s Exhaustive Concordance enumerates the word “hand” used in the Bible 1,448 times and “hands” are referenced 455 times. “It is clear that the biblical writers recognize both the practical and symbolic values of hands.”

Randolph reminds us of Albrecht Durer’s “Praying Hands,” a work of art depicting workworn hands uplifted in prayer to God that have inspired devotion of millions of Christians. He writes, “The model for this painting is an artist friend of Durer’s who had labored so hard to support Durer’s study of art that his own hands became useless for painting. Durer thought, ‘I can never give back the lost skill of those hands, but I can show my feeling of love and gratitude by painting his hands as they are now, folded in prayer, to show my appreciation of a noble and unselfish character.’ Durer’s friend expressed his faith through hands that prayed while Durer expressed his own faith through hands that painted.”

Randolph further writes, “We see than that our hands identify us as persons, reveal something about our work, communicate the various aspects of our personality, and provide a channel for the practical expression of our Christian faith. They provide the ‘perfect portraits’ of us. This has been true since the hand of God fashioned humanity in his own likeness. It was so at the Creation, it was so at Calvary, and it is so with contemporary people like us.”

As this cold snap began with the New Year the arthritis that began a decade or more ago in my hands reached a point of persistent annoyance that made me search out my gloves and pain reliever. That was especially true in my right hand which I had injured about five years ago in a fall as I delivered a package to be shipped to a former recovery student of the Mission. I looked at my hands and noticed how much they are beginning to look like my grandmother’s……enlarged knuckles forcing fingers into bent angles and thinning connective tissue exposing blue veins that look increasingly webbed and gnarly. Years of neglecting my hands are reflected in short cut nails and dry cuticles. I had become acutely aware, too, of how the years of neglect of my hands have made them look much older than those of some of my friends. I have found myself even hiding them under a scarf or in my pockets at times because of how they look. There seems to be no graceful way to present them that hides the toll of neglect. Bill, too, is experiencing difficulty with his hands due to diabetic neuropathy and arthritis. As we get older we find ourselves reaching for one another’s hands more often, just to hold, rub and warm them, a gesture of comfort and of knowing what each other feels and needs.  The picture included below is of my parents’ hands during a family celebration of their 60th anniversary.

As I have been reading Randolph’s book, I have been very conscious of my hands. He includes several references to poems and hymns that include “hand” references. As I read, I am conscious of what my hands might say about me. But I am also more conscious of how much I want God’s hands to grasp and guide mine and how I want to come to God like a little girl reaching to have her hand held firmly by her Daddy’s hand to provide the safety, security, stability, and comfort that she desires!
The hands of Christ
Seem very frail,
For they were broken
By a nail.

But only they
Reach heaven at last
Whom these frail, broken
Hands hold fast. (John Moreland)

Teresa of Avila’s verse points out how Christ entrusted his work in the world to our hands: 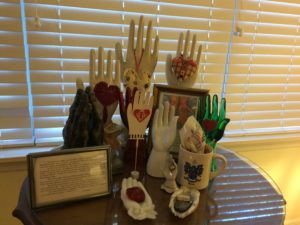