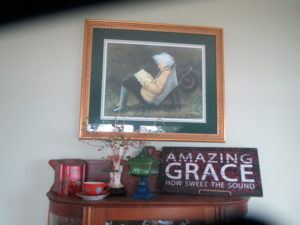 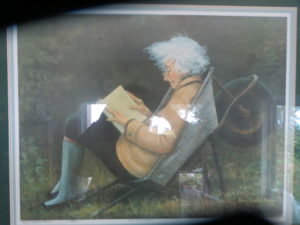 I have a limited edition print (75/500) called “The Old Woman” painted by Mary Shelton Burson in 1982. The date on the print is 11/20/1990. You can see she is sitting in a wheelbarrow reading something. I bought it, probably in 1990, from a friend who was a family member of the artist. As an avid reader, it spoke to my heart about a love that one never outgrows….reading! But today, as I thought about that picture, I got my magnifying glass and looked at the page of the book… in her hand, what the old woman is reading….it is unevenly spaced and variable handwritten script, not typeset text…probably a journal, her own or that of someone she loves! Awwww, I knew this picture spoke to my heart then and it speaks to my heart even more now! My journals are my conversations with God….prayers, expressions of joy, laments, frustrations, and the daily commentary of what I see. For years I kept them locked up and hid the key. As I gained confidence in who I am in Christ, I was free to share some of the entries with others. I may have the time and leisure to revisit some of them someday in such a mode as this old woman! Someone recently suggested that I do that and scan into my digital document file those that are particularly treasured and that I may wish to leave as a permanent legacy for my grandchildren. (My children know my failings too well to take seriously anything I offer as wisdom!)

Another thing that drew me to this picture is that the old woman reminded me of the grandmother of a friend of mine whom I loved, We called her “Gingy”. It was Winifred Wooten of Shellman, Georgia. She had a thick grey crown of hair that was usually windblown, as she spent hours each day in her beautiful yard. Gingy was one of those strong, self-aware women who was content with life, it seemed to me. I loved her eclectic home filled with various treasures from her own journey. She was adored by her husband, “Pop” and her granddaughters who visited every summer and holiday breaks. I can “see” Gingy in my mind in just such a posture as this! And perhaps, some day, me, too! Thank you, Lord, for the examples you put in our lives.

Gingy had had a double mastectomy at some point in her life. When I knew her in her in 70s and 80s she wore a thick padded bra. Reconstructive surgery was not so widely practiced in the 1950’s or 60’s which is when hers would have occurred, I expect. One day I bear hugged her and she said to me, “You know, I had breast cancer and a double mastectomy.” She said it very matter of-factly, as if it was simply something that happened, not something that affected her in any lasting profoundly painful way. That struck me as so strong. She had an easy laugh that I can still hear in my head today over 45 years later. In some ways Gingy was very much like my own two grandmothers….earthy, content, accepting of life on life’s terms, strong, joyful, and loving. Maybe it was the generation to which they belonged. Maybe it was the wisdom of years. Maybe it was simply that I saw in them something of the character of God expressed in a feminine personality and was drawn to the divine in them. I look forward to the day I will walk with them in the Garden and hear their laughter again.

The only other references I can find to this artist is a picture at smuteye.com called “Pigs” and a cover picture on a biography of a musician named Mickey Newberry that she did in which she is called a reknowned Alabama artist. They look rather happy, don’t you think? There is a Mary Shelton Burton, age 71, who apparently lives in The Villages here in Florida now! 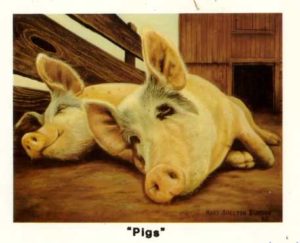