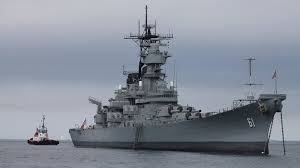 A Maritime Analogy for Responses to Conflict
From “Leadership Essentials for Children’s Ministry” (by Craig Jutila). The author gives a simple analogy about responses to conflict. He describes them as follows:

Something in this analogy caught my interest and I recognized myself in it. Unfortunately, I realized that my style of response is usually that of a battleship. Oftentimes, my response to conflicts I’ve experienced has been out of proportion to the issue. My style has always been to fight to win, no matter the contender or the issue. God has used several conflicts and this little maritime lesson to convict me about my response to conflicts in my life.

One day I was sitting on the deck of the Carnival cruise ship Fantasy, enjoying a Christian women’s retreat with friends. I was reading my Bible and praying and I recalled Jutila’s list.
As my eye roamed across the harbor of Freeport, Bahamas, I thought, “Lord, it occurs to me that there are at least two more (and maybe many others). Immediately, I thought of:
1.) Sailboat response- under one’s own power; requires great skill.
2.) Cruise ship response- following the time and itinerary of the Captain, being relaxed and present in the experience

Then I prayed, “Help me, Lord, to learn the proper response to conflict. I have too often taken the “battleship” approach. I know this is a problem with my response mechanism. Help me!”

In that brief moment, God spoke to my heart and said, “fishin’ boat response”. I had been reading the book of John and was at John 6. As I looked back to my reading, in the book of John, I saw the fishing boat account in John 6:16-21. To summarize, that scripture says that the boat full of disciples departed from the shore without Jesus, who’d gone to the mountain to pray. The storm arose. Jesus came to them, walking on the water, and immediately, as Jesus got into to the boat with them, they were at their destination. What does this say to me about “fishin’boat” response to conflict?

1.) Don’t go without Jesus in the boat, otherwise the journey is sure to be rough! (But in a similar story, as told in Matthew 22:22-33, we get the additional insight that Jesus INSISTED that they go without him. He had a purpose in allowing them to flounder in the storm. Sometimes he sends us out, knowing that the sea will be rough and we will have to wait for him to step into the boat.”
2.) If I find myself in “rough seas”, having left without Him, He’s still close by and will come to me.
3.) When He’s there, we will arrive safely at the place where we need to be.