Over the years I have observed genogram discussion sessions with Dr. Michael Carns, a skilled family and marriage counseling educator and practitioner with over 35 years’ experience, as he invited the Titus 2 students into this tool of self-discovery.

A genogram is a family diagram, which can be thought of as an elaboration of the family tree. Genograms provide a way of mapping family patterns.  In the sessions students, guided by Dr. Carns, look at the family dynamics from the standpoint of one’s relationship to others in things like ages and age differentials, sibling birth order, influencers, standard bearers for discipline or family values, role stereotyping, stabilizing or destabilizing experiences, and other observable family characteristics.
I remember one particular week, after a couple of ladies had done them, Family A’s student, an older sister to one brother and Family B’s student, a younger sister to an older sister and with a younger brother, we heard them express this observation about a pattern they saw:
Younger sibling watches older sibling’s conduct in the family and, if it is chaotic and rebellious, constantly at odds with parental authority, the younger sibling makes a conscious choice to do the opposite of what the older sibling did in order to avoid the chaos, drama, rebellion and conflict with parental authority.
The Family A student and the Family B student talked about how this played out in their respective homes. Family A’s older-sister student in Titus 2 announced that she had actually asked her younger, very successful professional brother one time how he turned out so “normal” and successful while her life was a wreck. He told her, “I watched you and did the opposite.”
Then the Family B student at Titus chimed in and said she, as the younger sister to a very strong willed and rebellious older sister, had done exactly the same thing in choosing to watch her big sister’s actions and the consequences of those same behaviors. She said, however, it wasn’t that she was so different from her sister, but that she simply learned to be less open with her feelings and more cautious with defiant conduct to avoid the drama and consequences. She went subterranean with anything that had the potential to be displeasing or unpleasant and became very conflict-avoidant.
They laughed about their “discoveries”…….and how each of them reflected opposite roles in their respective families. It does give some insight into how we relate to others and how one views herself in the family that becomes such an influence in our later lives.
They talked, too, about how knowing something about a person’s family and the relationships within that family can provide insights that help us understand, accept and love one another more readily.
After all of the students in the house have gone through genotype exercises, watching as each one’s family is reviewed in an objective way from a distance instead of from within it, you’d be surprised how much closer these ladies grow toward one another, how much more “family” they become to one another! It’s a good exercise in developing the intimacy to build real community. Even though you didn’t grow up together, you understand some things about why a person is the way she is…….. Oftentimes, students also become more grateful for the families or certain individuals in the families in which they grew up and merciful toward members of their own family and one another in the process.

For it to work, however, as a community building tool there already has to be a certain amount of commitment to being there for one another, of feeling “we’re all in this together”, and being safe enough with one another to be vulnerable.  Digging around the roots and shaking limbs of family trees can bring fruit that satisfies or branches that crash down on one’s head!  Encouragement and support are always readily available as our group comes together.

A pastor friend said she was part of a pastoral genogram group that met regularly in a previous community.  Now THAT would be interesting to explore!  One has to set aside any pride of pedigree and be willing to acknowledge the crazy relative that one would rather forget. 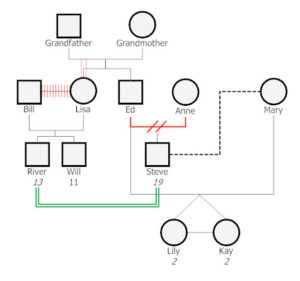