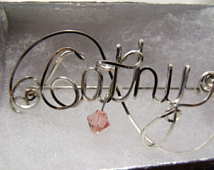 What’s in a name?

To call one by his or her name is a gift. It reveals a condition of familiarity, of knowing, of caring, of being in relationship with another. Our name is important to us. To have our name called by another means that we have value to others, as well.
Yet the Bible contains a number of stories about unnamed women, as well as about unnamed men. Among them are…..

Although we are not given all of the names of people in Bible….. (To protect the innocent? To direct attention to other details? To enable us to more readily relate to their circumstances from our own vantage point?)…..we may be sure that Jesus knew the name of every person he encountered. Some have said that just as the name of every star has been given by and is known to God, so it is that our names have been put on the hearts of our parents and given to us by God and he knows our name before we are even conceived.

One of the tenderest moments in the Bible to me is the moment when Mary Magdalene has gone with other women to the tomb on resurrection Sunday to complete the ritual preparation of Jesus’ body, and discovering that Jesus is no longer in the tomb. In her confusion and questioning, she mistakes the risen Savior for the gardener and pleads with him to tell her where Jesus’ body has been taken.

It is only when he speaks her name that she suddenly recognizes him and falls at his feet, clasping ahold of him and worshipping him.

I was attending a high school football game with my husband. We are grandparents of a player, but we know none of his friends or their parents. We were simply joining his parents in an unfamiliar place. As I walked up the steps watching where I stepped and holding onto the rail, suddenly I heard my name, “Hey, Mrs. Cathy!” I looked toward the voice and saw a young girl from our church who appeared to be at the game with a friend, both of them younger than high school age. It surprised and delighted me….. that she would be so kind as to acknowledge an old woman like me in public and call my name…..bringing a brief second of attention to both of us as we waved, smiled, and connected to one another.

Such a small gesture….. to call a name in a crowd…. to acknowledge another personally. But what a feeling of being seen and known….. not so anonymous and invisible.

Speak someone’s name today. Call out to them with a warm greeting. You will bless them.