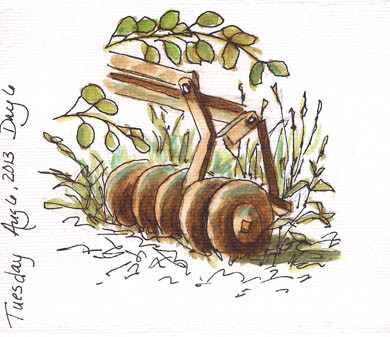 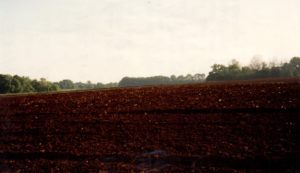 On March 20,1997, as I drove home from a work appointment God directed my attention to this field, freshly plowed, along the roadside of Highway 231 South, just north of Cottondale. As I glanced toward it, God suddenly spoke in my heart, “This is you.” It was so clear and piqued my interest. When I got home I read a number of scriptures about ploughed fields, the land, etc. 1 Corinthians 3:9 says,” For we are co-workers in God’s service; you are God’s field, God’s buildin…g.” It doesn’t get much clearer than that! The next day I drove back there, stood on top of my car, and took this photo. I had been in a place in my life, at 43 years old, of feeling that my best years were behind me. I had been grieving and feeling unfulfilled and suffering from a lengthy depression, although I didn’t realize it at the time. Suddenly, the Lord had shown me that, although I seemed to have been fallow for a while, there was another harvest in my life being prepared. 12 years later, on April 9, 2009. as I drove our Birmingham grandchildren home one day, Brady, who was 4 years old, said, “Look, Gigi, that’s a pretty field.” I looked to see what he was talking about and it was this same field through which God had spoken to me about preparing me for another harvest. It had been fenced in and turned into a beautiful pasture with white cows grazing owned by Southern Cattle Co. I had written on the back of the picture about his observation and how it spoke to my heart once again about that same field. This weekend I shared this story with him and showed him this picture and my note about his comment on the back. Tomorrow as I take him to meet his Mother, he said he’d like to go home that way, which we rarely do anymore, and see the field. We will stop and take a picture of what it looks like today. My heart is full. I have such joy in my life, knowing that was a new beginning for me. I have so much to cherish that God has done, is doing, and ways in which I am privileged to be used by him. There have been times when it was hard and, like Psalm129:6, a psalm of persecution and pain, I have felt the blade of being further prepared, “Plowmen have plowed my back and made their furrows long.” But I know that, even as the soil is turned in my life by such work, it simply means that more harvests will come! And no matter what, the land will not be destroyed. I am a co-worker in God’s service; I am God’s field!

We sometimes speak of circumstances being “harrowing”: to disturb keenly or painfully; distress the mind, feelings, etc., of…….or…. to become broken up by harrowing, as soil. Origin of the word is from a Greek word for “sickle.” (dictionary.com). On several occasions after particularly “harrowing” seasons of my life, when the plowman’s blades upon my back were acutely felt, I have had the Lord ask me outright, “Do you feel abused?” Always, my answer has been, “Never! I am yours, Lord, to be used any way you choose.” And even in the midst of those “harrowing” seasons, I always felt God’s protective hand, his comfort and reassurance that the harvest would be worth the distress of the preparation in turning the soil. At one point, actually in 1997 just 2 months after showing me this vision of the land, in a state of acute distress I heard the Lord speak in my spirit, “If this is too hard you don’t have to do it.” My response then was, “I can endure whatever comes. I want to be there for those you are bringing for me to serve.”