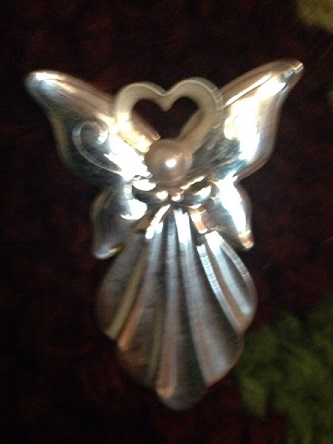 In about 2000, I was in a women’s small group that had some conflicts arise.  I wound up talking to one woman who was accused of an action that led to the conflict.  I had no personal involvement in the matter and she did not perceive that she had done what she was accused of, at least at first.  We prayed and I talked to her about moving forward from that point.   She gave me a small beautifully crafted angel pin that an artisan had named “Mercy” and she called me merciful in my conduct toward her.  I was embarrassed by her kind gift, knowing that the capacity for mercy in me is less than a thimble full, if any at all, most of the time.  I did not see my action toward her as mercy..…I had no authority or responsibility to judge her and therefore no authority to extend mercy, but it seemed clear that she was judging herself.  And because of her apparent self-condemnation for what she came to see as her part in the conflict, she viewed my reaching out to her as mercy.  Since I had not been wronged and did not condemn her, I offered her grace, not because I had any grace inherent in me, but because I have received God’s grace and I can therefore be a conduit of God’s grace, extending love, to others who, like me, are undeserving of such a blessing.  And because none of us is deserving of God’s grace, yet he extends it to us anyway.

In addition to extending the grace we have received from God to others, God calls us to be merciful, too, as God himself is merciful…….Luke 6:35-37  “Be merciful, just as your Father is merciful.  Stop judging and you will not be judged. Stop condemning and you will not be condemned. Forgive and you will be forgiven.”   Further, Matthew 5:7 says, “Blessed are the merciful for they shall receive mercy.”  To be called to mercy suggests that we also bear the responsibility for discernment that a wrong has been done and willingness to call it what it is…….and then to forgive it!  There is no need of mercy unless there is a wrong.  And the mercy we give, as with grace, is only available to be extended by us to others because God has given mercy to us…. God has provided both the capacity to exercise discernment of wrong and the ability to show mercy and forgive!  In our discerning of wrong, we are not to judge others, but only to show mercy and forgive.  God and God alone will judge in his time, in his way.  Or he will show mercy and forgive, as well.

Grace and mercy are often used as interchangeable terms. They are not, strictly speaking, the same.  There are times, however, when we extend grace to others that is perceived by them as mercy because of their own self-condemnation or knowledge of their sinfulness when we have no knowledge of it and no judgement toward them.  Other times we know the wrong and are called to extend mercy and forgiveness, even when the other person cannot or will not see their wrong.

Later, I was given another angel crafted by the same artisan.  Its name was “Truth.”  It was a larger angel, though fundamentally it looked exactly like the one named “Mercy.”

The Lord has given me a love of Truth but not, apparently, an equivalent capacity for loving Mercy.  I no longer even have the little angel named “Mercy”.  It never was one that I felt comfortable wearing, knowing that I had so little mercy coursing through me and no authority to judge another or to grant them mercy.  In my mind, only the one who deserved judgment would receive mercy, and then only from God.   I know how merciful God has been to me and the judgment I have deserved.  To take upon myself the role of granting mercy has been uncomfortable, not because I don’t understand it or because I don’t agree with the need for it. Mercy is the prerogative of the one who oversees justice.

However, mercy has a less judicial form- forgiveness.   I have often had to both give and receive forgiveness.

God has extended to me grace, mercy, and forgiveness.  All of that is a function of God’s great love.  All of them, too, are a measure of my capacity to love.  Not through any love that I have or know, but only because of God’s love to me.

I probably gave the little “Mercy” angel to someone in whom I saw a generous measure of the capacity for mercy.  And it was probably because it was given to me.

Truth is not just about the ability to discern right and wrong.   It is also the confident hope that God will, in his great love and in the fullness of time, right all wrongs.