Most people get married believing a myth,

that marriage is a beautiful box

full of all the things they have longed for:

The truth is that marriage, at the start, is an empty box.

You must put something in before you can take anything out.

There is no love in marriage; love is in people, and people put it into marriage.

There is no romance in marriage; people have to infuse it into their marriages.

A couple must learn the art and form the habit of

If you take out more than you put in,

the box will be empty. 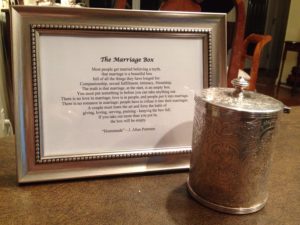 In 1986 Dr. Allan Petersen published a series of church bulletin inserts entitled “Family Happiness is Homemade”.   At some point an excerpt from one of those was printed in a magazine.  I copied it, entitled the excerpt “The Marriage Box” and began printing it out and putting it in a silver frame and giving it as a wedding gift along with a small silver box.  I gave several to special friends as they married and also to my son and his wife in 1995 when they married.

Today I began looking for it among my files and, when I couldn’t locate it, I went online to look for it.  I found “The Marriage Box” but all of the ones I found had “Author unknown.”  I am glad to provide that information for those who may want to know.

The photo shown here is how I have used this poem as a gift. I think now, as I have the opportunity to perform weddings and do counseling with families, I will renew this practice!

Here is more information about Dr. Petersen from the website of the group with which he was associated until his death in 2000.

“Dr. J. Allan Petersen began traveling in the mid 1940s as an evangelist speaking in churches throughout the U.S. and Canada. His concern for the people and vision for the church compelled him to focus on understanding God’s intentions and principles for marriage, family life and relationships.

As a nationally recognized marriage and family life specialist, he conceived and directed the 1975 Continental Congress on the Family, which brought together 2,500 leaders to address marriage and family issues and form national strategies to support and encourage marriages and families and prepare leaders to do so as well.

J. Allan published a family information and enrichment bulletin called Happiness is Home Made as an extension of his speaking. The name was later changed to Better Families.

By his retirement, J. Allan had traveled extensively, speaking to over 9,000 audiences in over 50 countries. He had spoken to religious leaders at the White House, was one of the founders of the Family Research Council, and in 1995, the International Family Congress awarded him the Lifetime Achievement Award for his dedication to preserving the Christian family. Dr. Petersen passed away in October of 2000.