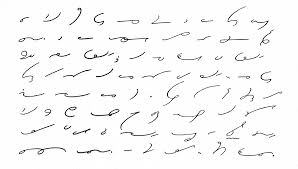 This morning I asked a young lady riding with me to church to write something down. She didn’t want to because she said her handwriting was so poor. She talked about her grandmother’s beautiful handwriting and the fact that her grandmother even knew shorthand, which is almost a lost art in today’s technological, voice-to-text age.
When she mentioned shorthand, it reminded me of something from over 30 years ago. I told her about a time when a friend’s husband had died. When she finally came to the point of moving out of the large Victorian home they had furnished and enjoyed together to move on with her life, she handed me a thick stack of yellow legal pad pages clipped together in a folder. She said it was a manuscript for a fictional book, set in some future time, that her husband, a retired Army Colonel, had written and she wanted me to have it. I was startled. We had been friends through our sons shared participation in soccer, which she coached. I had journeyed alongside her during her husband’s illness and death from leukemia caused by exposure to Agent Orange in Vietnam. I asked her didn’t she want to keep it for her sons, who were high school age at the time. “No,” she said. “I think he’d want you to have it.” I took the folder home and set it aside to review later. When I got back to it, it was illegible to me. I flipped through it and every page was filled with the same kind of foreign looking, but very precisely drawn marks. I put it in the bottom of a desk drawer and thought, “What in the world am I supposed to do with this?”

It moved with us from house to house in the bottom of that drawer for over 30 years. Just a few months ago, I thought about it and suddenly realized that it must be shorthand notation. I have a friend who does court reporting and thought perhaps she might know someone who is skilled in shorthand and could decipher these pages. I went looking for it and found it right where it had been left those many years ago. But when I opened the folder, the writing was quite clearly standard English cursive writing in easily legible and well-formed penmanship. I was shocked. In that first examination of the pages all those years ago I had seen wispy marks- curved, concise, and cryptic to one without the eyes to see and understand the script. But here, today, I was seeing perfectly formed sentences of words that were very familiar to me.

I knew that this had to be some sort of spiritual event. Words on a paper don’t just change from illegible symbolic script flourishes to readable English words by themselves. I had the sense that there was something meaningful in John’s work of fiction that I needed to see….or that the world needed to see. I am not a fiction writer, nor an editor. I called a friend who is both a published author and a gifted writer/editor. I asked if she was interested in reviewing John’s manuscript. She said, “Yes.” I turned it over to her. I look forward to hearing her “take” on his writing.
I had been part of John’s turning from denial of his impending death to acceptance and active participation in planning his home-going. I had gone to his hospital room late one day, after his wife and children had left. I talked to him about his faith, about the reality of his circumstances, and about his wife’s profound grief in the midst of the two of them not talking about what was becoming clear to observers of their trial….he was dying. I asked him to consider that she needed to hear what he wanted her to do with the house, directions for the boys, how to handle financial matters, etc. The next afternoon she called me to tell me John had gotten out of bed, the first time in days, and was waiting for her when she got to the hospital. They sat and talked all morning about his wishes, her needs, the boys’ futures, and more. She was relieved and joyful that he had found the voice and strength to give her this gift. I thanked God for my boldness in coming to this stoic and accomplished career military man with whom I had a somewhat formal and boundaried friendship in such an intimate way that had yielded something comforting to this wife/mother/friend. Looking back on that time now, as a more mature Christian, I wonder why it didn’t occur to me to pray for his healing. Of course, I was not yet a born-again Christian myself, but more of a “churchian” where his family and mine shared worship on Sundays.
Fast forward to this morning, years and miles and lifetimes later, as I walked into the worship service in progress, the worship team was singing, “Spirit of the Living God” by Vertical Worship:

On the way home from church the young lady and I revisited our conversation about shorthand and about my story of having seen a written document go from illegibility to legibility across the span of three decades. Was this a miracle of seeing or a miracle of transformed physical properties? Had God prevented me from reading and understanding John’s manuscript until this time? Was it necessary for me to be in a different spiritual place in my life to be able to see and understand the words on the page?

That was how it had been for me in growing into the ability to read the Bible….I had to have spiritual eyes and mature, surrendered belief in the Author to begin to understand it.

In thinking of this as a spiritual and supernatural phenomenon, I wondered out loud, instead of being from the Lord, if satan had been in the middle of my inability to see and understand when I first saw the manuscript because he did not want the content to see the light of day. Several times through the years I had considered just throwing it away when we got ready to move, but I always just dutifully put it in a moving box with other things from the desk and back in the drawer without looking at it. Was I treating it like some talisman? Had John written something heretical or occult that I had foolishly and unknowingly protected for years?

The young lady reminded me of the worship song…. When You do what only You can do, it changes us. It changes what we see…..and what we seek. She said that chorus, which was being sung just as I walked in, seems to be confirmation that such a supernatural experience would undoubtedly be from the One who gives us spiritual eyesight.

I think the young lady has received her spiritual eyesight, too!

One thing the Lord showed me in 1997, when an extended depressive episode led to my decompensating into a psychotic break, was that my senses- seeing, hearing, smelling, tasting, and touching- can all be deceived…….that even when one experiences something through the physical senses…. it needs to be tested. Rely on what you KNOW, not what you sense. Such physical input is only reliable up to a point. But God will confirm the truth in one’s spirit. I believe that what I saw in 1988 on the pages of John’s manuscript was an “unknown tongue” to me. I was not at a place in my life to deal with the emotions of my journey with this family, I believe God used me in a way that today would be very comfortable and in character for me, but at that time was totally foreign to me and beyond my equipping. The illegibility of the manuscript was God’s way, I think, of telling me that I was not yet fully equipped to interpret and participate carrying out his will with others, but I was willing to be made that way