I have been watching the Charlie Gard drama from across the Atlantic Ocean with a heart that aches.  Little Charlie has been given up on by the “system”, though his parents desperately yearn to continue the fight for his life and, believing that there is a medical miracle yet to be tried in America, they are battling their own, and little Charlie’s, reality with all their might.  They have chosen a reality that is fixed on hope.  The system’s reality says there is none.

Dr. Scott Peck in The Road Less Traveled wrote “Life is difficult.”   That is an often felt, but less often spoken reality.  Somehow, as I have read the account of creation in Genesis and contemplated the character and actions of God, I don’t think it was intended to be so difficult.  In fact, the Bible is quite clear that it was not.  The Bible is also equally clear that the forces of evil that disrupted God’s plan for humankind and the natural realm in which we reside have already been defeated by the death and resurrection of Jesus Christ.  The victory is won, but we are still living in the “mop up” phase of early eternity, awaiting the moment when all the remaining guerilla rebels and isolated enemy troops who haven’t gotten the message yet or who have refused to accept defeat and surrender are corralled and placed beyond the reach of further harm to God’s prized people and world.

In the meantime, God continues to work redemptively on our behalf.  Medical breakthroughs, new discoveries, unexplained serendipities that arise, and even slow improvements to longstanding dilemmas find their way to the collective consciousness and we marvel at “good” news that gives us hope.  Sure, there are heartbreaking diseases that remain to be cured.  There are seemingly intractable troubles that continue to evade easy and obvious solution.  But time is our friend.  God is still God and he is still at work on our behalf.

Life is, at times, very difficult.  Sometimes, it seems, impossibly so.  But if we believe in God, we know that what seems impossible now will someday be the new reality.

I had a plaque one time hanging by my back door that said, “Do not adjust your attitude.  The problem is with reality.”  Reality has been so marred by the forces of evil let loose by mankind’s disobedience to God that what we know as reality now is a hard road to travel.   Those who do not know and accept that truth about reality expect something different, something easier, or something more accommodating and pleasant in life.  They are often disappointed.  Sometimes to the point of despair.

Do we have the right to battle with reality?  Must we simply accept the reality that presents itself to us? Are we helpless against those who have the authority and who wish to define reality for us in terms that snatch our hope away?

At a point that I was engaged in a significant challenge to what I had always understood as reality, I shared with a psychiatrist my vision for a future reality that I believe God has given us and for which true believers hold out hope.  I asked him, “Am I crazy to think this?”  His response, as a fellow Christian, was, “No.  You are not.  I, too, believe in that vision.  You hold on to that.”   It is a lofty vision.  One that reveals a future when all of life on earth is at peace and all humanity knows, reveres, and is obedient to Christ.   It is the promised future of a new heaven and a new earth.  I believe it will come.

But today, while it is being formed, we are still in the here and now and must face circumstances that are anything but heavenly from time to time. Those circumstances are fraught with tears……..tears of anger, of fear, of injustice, of shock, of deep sadness, of doubt about ourselves and about God, and so many more emotions that seem out of order, according to what we know of God’s ultimate and perfect will.

It will not always be so.

How do we live in the transition between the “beginning of the end” of life in a hostile and broken world that is coming to an end and the “end of the beginning” of the redeemed world that is coming into being, all of which began with the resurrection of Jesus Christ?   That was the event that turned the tide of history as it had been being written since Adam and Eve were put out of Eden.  The gradual arc of time seems so slow to us, living it out day by day at ground zero.  But from the perspective of Christ’s throne above, it is a mere nano slice of time.

I was thinking about that little snippet I had written and saved about Jesus’ tears as he looked out over Jerusalem and prophesied its destruction as he prepared for the triumphant entry into that city.

“Luke 19:41-44 “Jesus’ prophetic view of what lay ahead for the Temple (which would be destroyed in 70 A.D.)- destruction.  He had already given a clue about the Temple’s future in his conversation with the Samaritan woman at the well in John 4:19-26.

“The woman *said to Him, “Sir, I perceive that You are a prophet. 20 Our fathers worshiped in this mountain, and you people say that in Jerusalem is the place where men ought to worship.” 21 Jesus *said to her, “Woman, believe Me, an hour is coming when neither in this mountain nor in Jerusalem will you worship the Father. 22 You worship what you do not know; we worship what we know, for salvation is from the Jews. 23 But an hour is coming, and now is, when the true worshipers will worship the Father in spirit and truth; for such people the Father seeks to be His worshipers. 24 God is spirit, and those who worship Him must worship in spirit and truth.” 25 The woman *said to Him, “ I know that Messiah is coming (He who is called Christ); when that One comes, He will declare all things to us.” 26 Jesus *said to her, “I who speak to you am He.”

William Bridges, in his book Managing Transitions, diagrammed what a transition looks like as one moves through it over time, having stepped across the vertical line that marks the event of importance that initiates the change.  As time progresses, one moves from the dark space of the “beginning of the end of life as it used to be”, through the grey (anything but neutral) zone of “no man’s land” where one’s reality can seem so equivocal that she isn’t sure if she’s coming or going, and eventually emerging into the light space that represents the “end of the beginning of life as it will be”.   I have both experienced my own transitions and observed so many of them as others experienced them that it feels almost “normal” to be constantly in transition from one state of being to another.  I have to remind myself that while knowledge of this process makes it endurable for one who has a vision of the future to which she is moving, for those who lack that vision or who were forced into the process against their will, it is a very destabilizing and even frightening journey. 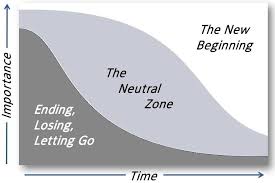 Managing Transitions by William Bridges-  Diagram of the process

One of the most memorable moments of revelation for me about the pain of transition occurred when our son, Billy, was about 12 or 13.  He was in the throes of adolescent angst, at odds with some peers, experiencing some social awkwardness and anger over the meanness of some people and just beginning to find his footing physically in a body that no longer felt like his own.  In tears one day, he flung himself down on the sofa and, with his head in my lap, he cried out, “I don’t want to grow up.”

Life is difficult.  My heart ached for my little-boy-struggling-against-becoming-a-man.  He somehow knew life as an emerging adult was not going to be as innocent and carefree as childhood and, in that moment, he didn’t want to change.  Who could blame him?  In that moment all I could do was hold him in my arms, let him cry it out, and then reassure him that, yes, life can be difficult at times, but it is still good and things will get better.  In spite of our resistance, some transitions move forward and eventually, most of us find our footing and we learn to live into the new reality.

Living into any new reality is easier if one is confident in God’s presence there.  Not everything is going to feel all right, all the time.   But God’s presence will make the discomfort, the doubts, even the pain, bearable.  Keeping one’s eyes on Jesus, the one who walked the road less traveled before us, who is, in fact, the trailblazer and the guide for us, will help us get through the tight places, around the obstacles, over the crevasses, and arrive at the destination.

I follow on Facebook and through our weekly times in a shared women’s group the adventures of one woman who bicycles all over the place with her husband.  A few weeks ago the wife posted a picture of a tree that had fallen in a narrow pass, making the roadway impassable.  The only way through to the other side was, well, through the tree.  It made me laugh to see the picture of the bicycle being carried through the branches and over the trunk by her husband.  That’s the way life is.  Sometimes it’s easy coasting downhill.  Other times it’s pumping and pushing against a hill and sometimes you just have to get off and carry the bike through a tree!  But as my wise bicycling friend has memed on her Facebook page, “It doesn’t matter where you’re going.  It’s who you have beside you.”

I have known the Lord for most of my life.  I have known and cooperated with the reality that he is right here with me to share every joy and help me face every obstacle for nearly thirty years.  I yearn to have the women he brings to me know that kind of Savior…..The One Who Is…….most assuredly present and providing whatever one needs in the moment.

While the skewed reality of this world is still groaning as it is in this present darkness of the transition that began with Jesus Christ, some still dwell in the darkness, others are wandering in the grey neutral zone, and some are emerging into the Light of the New Beginning that is eternity with Christ.  I thank God for the Light that goes with me through all transitions now.

Can we and should we challenge reality?  Yes.  If that reality does not match the one that Christ makes possible and to which he calls us all, then we should challenge it, tooth and nail, day and night, win or lose.  Every small victory will be an advance for all humankind.  Any defeat will only temporarily delay the inevitable.  That is the vision given to us by God.  We have no reason to accept less than God’s BEST for Charlie Gard or ourselves.  We may not always know what that looks like, but until God frees us to let go of the effort, we should continue to press for what we do know of God’s good will moment by moment, following The One Who Goes Before Us.