I have many times observed the dual nature of fire. Rightly controlled and contained to accomplish particular tasks, it is tremendous tool for humanity…….smelting iron ore, refining precious metals, cooking, heating a home, as well as in in the production of many products that make life comfortable, efficient and safe. When it is allowed outside of contained and controlled uses it can be a terrible, wide-spread destructive force.

Refining Fire or Fire of Self Righteous Justification

For several weeks God has been giving me little nudges and reminders to do a word study on “fire” and “burning”……the comprehensive kind that requires a significant amount of time to find, sort, and catalog the references in the Bible. He had me do that one time with “fear”. Another time it was “boldness”. Another time it was “faithful.” Always there is something new that God leads me to discover in the process.

I have not yet begun this assignment, but when I have felt the urge again I have thought several times about Wesley’s words:
He describes how someone read from Luther’s Preface to the Epistle to Romans. About 8:45 p.m. “while he was describing the change which God works in the heart through faith in Christ, I felt my heart strangely warmed. I felt I did trust in Christ, Christ alone for salvation; and an assurance was given me that He had taken away my sins, even mine, and saved me from the law of sin and death.”

I don’t think it is that extra-biblical witness of Wesley’s personal experience to which God is directing me. But I do believe that the nudge to study “fire” and “burning” are related to the issue of experiencing God at work within as John Wesley did that night at Aldersgate.

As I think about Wesley’s experience it occurs to me that it was not the event of the strange warming of his heart that defined his experience….it was in listening to the description of a heart changed by faith that true and profound faith appears to have come upon him, as he says:
“I felt I did trust in Christ, Christ alone for salvation” ; and
“an assurance was given me that He had taken away my sins, even mine, and saved me from the law of sin and death.”

It was the assurance of his faith in Christ alone for salvation that was heralded by the strangely warmed heart that is the significant part of the story, it seems to me. The assurance provided gave him a sense of freedom from the penalty of sin and death…..It was a truly justifying moment for him.

Strangely warmed heart feelings, in Wesley’s case, may well have been the physical manifestation that God used to intensify and internalize the message he was hearing about a hearts being transformed, going from hard stone to tender flesh by faith in Christ.

But God didn’t stop there. He put in Wesley a further fire….the refining fire of the pursuit of holiness, sanctification. Wesley’s description of the work of grace in one’s life and means of grace began a move of revival and pursuit of holiness that swept across the ocean and around the world. Sometimes the two…..justifying work of the Holy Spirit and the sanctifying work of the Holy Spirit arrive almost simultaneously, or so close together that it seems so. Other times the two experiences are months or years apart.
Tonight I was scrolling around online and discovered this new book: 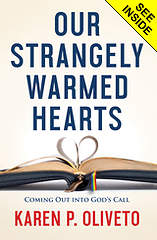 In her new book, Karen Oliveto, self-avowed lesbian bishop of The UMC, describes how “coming out is a deeply spiritual process that has led them (LGBT) to recognize they are, indeed, authentic, God-created, and graced selves”. She relates their experience in finding their true identity as gay people who have a spiritual call to ministry to Wesley’s Aldersgate experience. It seems to me, however, that Wesley’s experience of finding his true identity in Christ transformed him from a religious practitioner to a man with a profoundly intimate gratitude and love for Christ and Christ’s work of redemption on behalf of him personally. His faith went from impersonal to highly personal in an intimate knowledge of and relationship with Christ. Karen Oliveto appears to attempt making the case for LGBT persons’ spiritual/sexual identify going from a highly personal experience to a universally celebrated and normalized status everywhere by everyone. Those are not the same processes. Impersonal religiosity transformed into personal spiritual identity by the justifying work of the Holy Spirit…..compared to ………personal sexual and spiritual identity made into universally celebrated sexual normalcy by the force of cultural coercion.

Wesley’s experience was not a validation of who he was or what he did, but an indication of a deep inner transformation into who God intended him to be. Unlike Oliveto’s apparent aim in her new book, Wesley’s ministry was not about justifying himself, his feelings or his experience. It was about pointing to the justifying work of Christ available to every person.