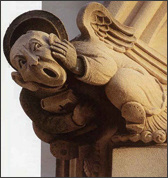 I wrote about a spiritual attack on someone and having observed a pattern in that attack that I had seen before. I have experienced a few spiritual attacks myself on occasion, so it is a matter of interest to me.

Several news service articles have been written about a psychiatrist, Dr. Richard Gallagher, who provides assistance in “discerning” the presence of demonic spirits in individuals referred to him by others. He observed:

“ ‘The clergy of many different faiths who have sent people to me sense that something is happening that is of the world beyond.’ These victims, he said, should not be left to suffer because of the scepticism of conventional medical opinion.”

Here are links to two articles about Dr. Gallagher’s practice:

Spiritual counselors frequently encounter “spirits” influencing individuals and, rarely, possessing them. There are some signs….a very blank or confused look in the eyes, an attitude of defiance even when there is no one asserting control, an aversion to Christian spiritual practices (like reading Scripture or prayer), perverse attitudes regarding relationships, etc. There are the “walking around variety” and those that are so disabling that one becomes totally dysfunctional. The lesser variety will leave when discerned and confronted if the individual wants to be free of it and is getting good emotional and spiritual support. I have confronted a few over the years, sometimes the demon left, sometimes the person left due to denial of the problem influence or unwillingness to be rid of it. The first time I discerned an evil presence was in 1993 with a woman who was emotionally distressed and tormented, hearing voices. She was a practicing member of the Church of Christ, Scientist, and therefore unwilling to seek medical and mental health services. The voices were clearly malicious, tormenting, and sexual in nature. I asked her if she believed she could be being harassed by an evil spirit. She said, “Yes.” I prayed with her, stayed in contact for several years and continued praying, also insisting that she see her medical doctor. She finally went and was diagnosed with glaucoma, diabetes, hypertension, and anxiety. She accepted treatment, left the COC,Scientist, eventually applied for and received disability, and lived at peace. There were additional family and economic circumstances that had contributed to her emotional distress, but there were clearly evil influences tormenting her, as well.

There are people in Bay County attempting “deliverances” in ways that are abusive and traumatic for individuals. I confronted a preacher after a young woman in a residential program was manhandled by him and a female church member in an empty church building after hours with yelling, inappropriate application of anointing oil, and physical restraint of her on the floor with a Bible held to her head. She had been seduced into an open state of mind through having her color a drawing of a mandala to relax her mental guard before she was taken there. She was not told what was going to happen. It resulted in post-traumatic stress, delusions, hallucinations, fear, and religiosity psychosis which we reported to authorities after she came to Titus 2 when a counselor in the residential program abruptly called us to say that the young woman needed “a faith-based program.” (Uh, yeah, after she was subjected to such religious abuse!) . The individual who attempted the “deliverance” continues serving in a local church pulpit. I am alert to reports of his activities and we told authorities who investigated the incident that we would expose him if there were additional reports of physically forced and unethical religious abuse again. There is no way to know how many unsuspecting emotionally distressed people are subjected to such practices by individuals who lack proper training for it and who do more harm than good to people in fragile states of mind. It is sad, too, that medical and mental health practitioners often discount the reality of demonic influences in the spiritual realm that can disrupt the lives of people and do not make help available to people who may be under such attacks.