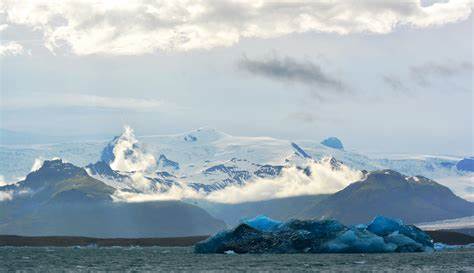 Genesis 1:2 Now the earth was formless and empty, darkness was over the surface of the deep, and the Spirit of God was hovering over the waters.
Day 1 is described here. The conditions and components of the beginning of creation are described: Heavens, Earth, Darkness upon the “deep”. Notice that the Spirit of God is moving upon the waters, present upon the Earth from the very beginning. (Think “vapor”) Then Light is created.
Genesis 1: 6 And God said, “Let there be a vault between the waters to separate water from water.”
7 So God made the vault and separated the water under the vault from the water above it. And it was so.
8 God called the vault “sky.” And there was evening, and there was morning—the second day

Day 2 ‘s creative energy resulted in Water above the vault, Water below the vault, and the Vault itself is “sky”.

Genesis 1:9 And God said, “Let the Water under the sky be gathered to one place, and let dry ground appear.” And it was so.
10 God called the dry ground “land,” and the gathered waters he called “seas.” And God saw that it was good.

Day 3 ‘s creative work results in seas of gathered water and dry ground emerges- as well as vegetation, which was a part of that day’s work.

A one elemental one essence of three “states”, one God of Three Persons, way of understanding the Trinity is something that has intrigued me as I have thought about the states of H2O and how they relate to how we observe the Divine in three persons- Father, Son, and Holy Spirit. For the sake of a comparison, the solid state, or mountain snow can be thought of as representing the righteousness, as being holy, holy, holy righteousness of God, which is also shared by Christ and which is placed upon us when we receive Jesus Christ as Savior. The liquid state, the Living Water can be thought of as being Jesus Christ the Incarnate God that dwells with humanity in the rivers, lakes, and streams- flooding the land, bringing also the rich silt and making the land fruitful. Jesus takes our form, journeys with us, among us, and is our living water! Eventually Jesus’ essence returns to the saline ocean reservoir (“the deep”) where, once again the vapor rises from the confluence of the ocean. This pure Holy Spirit H2O is borne back to the mountain where it begins its journey again. The same substance is present throughout, purest on the mountain top, moving among and within us, and being borne back to the place of God after it has run its course. This is an eternal unending cycle of the movement of the Holy
Spirit upon the waters of the Earth, wherever they are and in whatever state they exist, based on the conditions of temperature. Do all three exist simultaneously? Yes. Can the three states of H2O all exist simultaneously? Yes. If you don’t believe me set a glass of ice water on the patio in the sun with you. You will observe the solid and liquid, but in the presence of the sun’s heat, you may be assured there is vapor rising, as well from the droplets running down the condensation on the outside of the glass and from the surface of the water on top. Let it sit until the Ice is all gone and the temperature rises to the ambient air temperature and all you will see is the liquid, though you can be sure the vapor is still rising in the heat. If you doubt it, just let it sit a while longer and watch the level of the water in the glass slowly disappear over time. One has to continually refresh the ice, return to cooler indoor temperatures or drink room temperature water. Perhaps this is what Jesus meant when He said to the Laodiceans, “I would rather you would be hot or cold instead of lukewarm. Because you are lukewarm, I will spit you out.” They lacked the invigorating power of the icy pure holy, holy, holy refreshing presence of the Spirit of Creator Source Father God as well as the invisible rising vapor present in the heat of the Holy Spirit! Both Father and Spirit witness to the truth of Jesus Christ and if neither of those are present then how can one have real relationship with Christ and the accompanying passion and assurance of their faith. It is just religion for religion’s sake.

God the Father, God the Son Jesus Christ Messiah, God the Holy Spirit are all one essence and exist seamlessly as one- omnipresent, omniscient, and omnipotent. What determines how one sees God does not depend upon how God is, as God simply “IS”, but it is in the conditions in which we find ourselves and the need that we have at any moment for the Person of the Trinity with whom we can most readily connect and relate in the moment. What is our need? God is the sufficient provision of that need, and makes Himself known to us as we need to know and experience Him present with us. Are there times I long for the majesty, knowledge and presence of holiness conveyed in the covering of righteousness, like snow? Times when I desire and seek the meek and gentle co-laborer, example-setting, Way-making, yoke-sharing, refreshing, cleansing, growth-producing, presence of Jesus Christ, Lord and Savior, like living water? And times I need the permeating, whispering gentleness and the regenerating breath of the Holy Spirit to fill and sustain me? Whatever my need and condition, The Triune Godhead is present to me as I need, according to His desire to make Himself and His will known to me. I and the conditions in which I happen to be at the moment determine how God comes to me. I want to be open to the chill of awe, reverence, discipline, and holiness represented in the Creator Father God. I also want to know the rising temperature of the Holy Spirit that calls one to rise up, to move, in ways seen or unseen. But unless one knows and understands these as aspects, too, of Jesus Christ as He truly is, the Incarnate God, Lord and Savior of mankind, the One who dwells with us always and gives us purpose, one cannot know the fullness of God as He reveals Himself in Scripture and in nature and as He wishes Himself to be known.

Is God One? Yes. Does the Godhead make Himself known to us in Three Persons- Father, Son, and Holy Spirit? Yes. Is the Creation the same essence as the Creator? No. Is the Creator revealed through the created realm? Yes. This is really not so difficult. One God. Revealed in Three Persons, based on our need and his purpose for our lives, not the particular Presentation of Himself, per se, in that moment for my benefit. God is omnipresent and immutable in all ways at all times… defined first and foremost as Spirit of the Living God, which MOVES UPON ALL THE WATERS OF THE EARTH, for water is necessary for life and where there is the Spirit of God, life exists. Abundant life is known when the fullest measure of God in all His Triune Godhead Glory! THAT, the fullness of grace and truth, the abundant of living not just in the spiritual realm after death, but in the physical realm now…. both of which are eternal! Until one realizes that eternal life begins here, now, with the fullness of God expressed in the Triune Godhead, one will never know the One True God!

Co-eternal, Co-existent. Omnipresent. Immutable. That is the meaning of such “otherly” Divine attributes and is the character of the Triune Godhead. The only difference lies in our ability to see, our human need for the particular ministry of the Person with whom we can most relate in the moment according to our need, and God’s purpose and will for our life. Whatever that need is, God has said “I AM….” The All Sufficient One, the Provider. The Equipper. The Beginning and the End. The All in All.