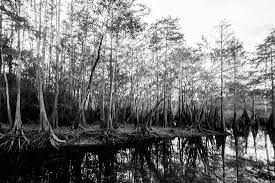 Recently, I was driving on one of those overcast on-again-off-again rainy days and came upon a scene near the road of a marshy swamp of cypress trees….It was a dreary scene… dark, still, ominous, and hardly inviting. Yet, I saw a beauty in it that I had never noticed before …. The trees still stood tall and reached to the sky. Their tops still held green leaves that showed life and defied the gloom of the dark watery swamp. The cypress knees gave the impression of spreading out a foundation and holding firm to something deeper and more solid. I was suddenly moved by their determination to bring something beautiful and life-giving to a scene that appeared so dark and life-draining.

” ……modern Christians are seriously disenchanted. We find it hard to appreciate mystery. We lack a capacity for wonder, and have a strong aversion to anything labeled “supernatural.” We can partially blame our enchantment deficit on the Enlightenment, the period N.T. Wright, in his book Scripture and the Authority of God, describes as the “we know better now” project.
Over the last few centuries, the “knowing better” project has been in full swing, demanding people turn away from superstition in favor of a world governed by reason and science. Proponents of the modern project liked to point out what the world looked like when it was ruled by magic and superstition—religious wars, witch hunts, and heresy trials. They made a convincing argument for letting go of the supernatural in favor of the material world governed by reason and science.
By the 20th century, people in the Western world had pretty much freed themselves from supernaturalism and magic. However, there was a trade-off in this freedom, what Max Weber described as “the burden of disenchantment.” In a lecture titled “Science as a Vocation,” delivered at gathering of science students at Munich University in 1918, Weber acknowledged the necessity of disenchantment in order to enter the modern world. Understanding his words would be hard for some students, he gave them an out, namely, if they were not willing to bear the burden of disenchantment, they could leave the university and “quietly return to the arms of the old churches.” Cheryl Bridges Johns

Early in the 20th century, Hermann Hesse wrote about 3 stages of faith development: It begins in innocence (paradise, childhood, the irresponsible stage.) From there the path leads to guilt, to the knowledge of good and evil, to the demands of culture, for morality, for religions, for human ideals. For everyone who passes through this stage seriously and as a differentiated and maturing human being it ends unfailingly in disillusionment, that is, with the insight that no perfect virtue, no complete obedience, no adequate service exists, that righteousness is unreachable, that consistent goodness is unattainable. This is exactly what Solomon, the most wise man to have ever lived discovered in his own pilgrimage: He described it this way: “ All is vanity.“ The despair leads either to defeat or to a third realm of living in the spirit, to the experience of a condition beyond morality and law, an advance into grace and release to a new, higher kind of irresponsibility, or to put it briefly: to faith.

What Cheryl Bridges Johns describes, calling it “the winter of our disenchantment” is simply the playing out of this journey of faith in a bigger, culturally and nominally Christian venue….. where people realize that something is amiss, that we have the form of religion without the power, that something is about to change.

This is the state of today’s post-modernism…..defeat, disillusionment, disenchantment. it’s exciting to those of us who are Christian educators. We know where the path leads.

Advent and the Winter of Our Disenchantment