I have been reading “Jesus and the Land: The New Testament Challenge to Holy Land Theology ” by Gary Burge. I have to take it in small bites and read it side by side with Scripture. The notion of “the land” as more than geography has been one that has rolled around in my head since God spoke to me through a vision of myself as “the land”, a plowed field in 1997, and it was confirmed to me that much of what we observe in the physical realm has a corollary in the spiritual realm. Hence, Jesus’ prolific use of parables and metaphors….Margaret Manning of RZIM shares her own experience of a personal revelation about how God uses geography to transform his people and draw them to himself.

Spiritual Geography      7-31-18   RZIM   by Margaret Manning
Many years ago, I had the opportunity to travel across the country from Massachusetts to Montana. While I had often traveled across the country on family vacations, I had never driven through South Dakota. But on this trip I was able to see quite a bit of the state that makes up part of the Great Plains in the United States. Having lived near the city, I remember being struck by the vast expanses of what appeared to be uninhabited land. Rolling grasslands, without many trees, offered a view of the landscape that was as far as it was wide. I remember wondering why anyone would make a home in such a desolate place.
Several years after this trip, I read Kathleen Norris’s book Dakota and marveled at her poignant description of this land. Her memoir both enticed me and made me wary of life in the Dakotas. The opening paragraphs of her book explain why:
“The high plains, the beginning of the desert West, often act like a crucible for those who inhabit them. Like Jacob’s angel, the region requires that you wrestle with it, before it bestows a blessing… This book is an invitation to a land of little rain and few trees, dry summer winds and harsh winters, a land rich in grass, and sky and surprises.”(1)
She concludes by saying that “the land and the sky of the West often fill what Thoreau termed our ‘need to witness our limits transgressed.’ Nature, in Dakota, can indeed be an experience of the holy.”(2)
It is here that Norris intricately connects a geographical place with the possibility for spiritual revelation, a phenomenon often termed “spiritual geography.” A spiritual geography is recognition of the intersection of one’s physical geography with an internal or spiritual geography. Norris describes, for example, the fierce independence of those who reside in the Dakotas and their fortitude in response to the harsh conditions of climate and terrain. 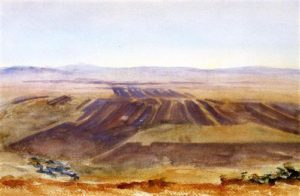 John Singer Sargent, The Plains from Nazareth, watercolor on paper, 1905.

A sense of place, land, and geography also fills the pages of the Bible. There is hardly a description given of persons and events without also discussing the physical landscape. Particularly in the narrative of the Exodus from Egypt and the subsequent sabbatical in the wilderness, one is struck by how much the geography functions as a character in the grand story of the redemption of Israel. It is the wilderness, this wild place of drought and barrenness that God chooses as a place for revelation. In fact, throughout the spiritual geography of Scripture, God consistently shows up in arid regions—in the brutality of loss, the determination of suffering, and the thirst for healing.
Moses, for instance, meets God in the wilderness. After living in luxury among the royalty of Egypt, Moses flees to the wilderness after killing an Egyptian. The text of Exodus tells us that Moses was tending to his father-in-law’s flocks, leading them to the “west side of the wilderness.” The “west side” means little to the reader until the next statement alerts us that here in this place was Horeb, “the mountain of God.” God made a dwelling in the desolate wilderness of Midian.
And it is in this place that God reveals the name that would be God’s memorial name to all generations. I AM meets Moses in this wild place, as a bush that would not be consumed, near a mountain that was the mountain of God. God is revealed through the signs and wonders of this wilderness landscape. The place itself is called holy ground and Moses is commanded to take off his shoes before coming near to the burning bush.
Perhaps the memory of this encounter is what sustained Moses through the many years ahead that he would spend in the wilderness. Though the landscape would be barren and desolate, though his human limitations would be transgressed by a grumbling and complaining people, God would be, just as God had been, specially revealed in the wilderness. By day, God would accompany Israel as a cloud to cover them from the burning heat of the desert. By night, God would burn as a pillar of fire to light the way through the desert.
In a culture that values productivity over reflection, I’m reminded that the spiritual geography of wilderness serves as a necessary correction. We don’t often allow ourselves to explore the barrenness of our internal wilderness. Furthermore, when we find ourselves in exile, dislocated from all that is familiar and comforting, we don’t always trust that even in places of desolation, even in places that “transgress our human limits,” God can be revealed. In places of foment, where what was known seems taken out of reach by violent storms like the twisters that churn up the desert plains, the voice of God may still be heard—even here.
The spiritual geography that presents itself from the Judeo-Christian tradition is that God can make springs of living water pour forth from stones, and can provide bread from a seemingly empty heaven. The stark landscapes of our world and of the world of the Bible remind us that there is internal work that can only be done in places of apparent wilderness, when productivity, fertility, and efficacy are not a visible part of the landscape. In fertile places, we don’t sense our human limits as we do in the desert where our need is desperately apparent. God’s presence becomes palpable in the desolation. And yet, in the desolate places, God’s power is made apparent in our weakness.