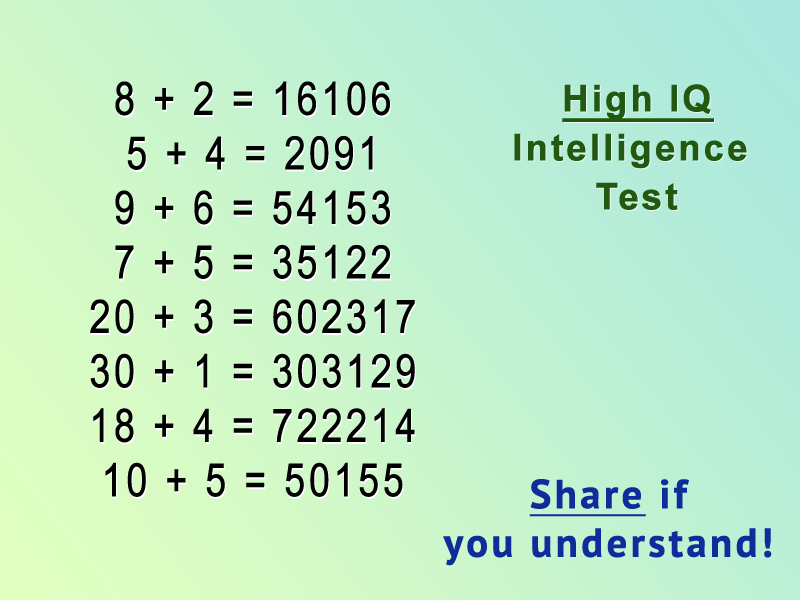 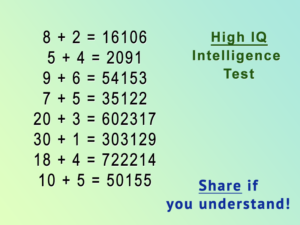 Several people quickly responded that it was a simple test and easy to discern.

One gentleman, Richard P. Harris, who is apparently at least a math enthusiast if not a math instructor, wrote this:
“ I dislike these things. Math is simple: 8+2=10 Any other answer is not correct. The proper way to state the above meme is f(8,2)=16106 etc…
Yes, I am a purist but with the way kids are (not) taught proper math, this could be confusing to them.”
I, too, posted in response to this meme:

Cathy Boyd Byrd: “I agree that math should be stated correctly for the truth and accuracy it reveals about things. .. Playing games with numbers can be fun, but for some people it becomes a compulsion and even an obsession……using them to try to predict outcomes and even tell the future, sometimes with devastating consequences. The simple pattern and principles in this example are easy to see for someone with basic math skills. To suggest it reflects a high IQ is, in itself, an appeal to ego and a temptation to pride of life. I dislike the way memes on social media appeal to people’s desire to be thought intelligent or clever or genius. I had a recovery student who had taken one of these silly social media “IQ tests”. Its results told her she was a genius. Her poor deluded, drug clouded, immature mind bought that lie and she became unteachable. This is another ploy of the devil….convince people of how smart they are, when in fact, they are being duped.”

This is one of the real dangers of the kind of things being promulgated on Facebook and other social media. There may be just enough obviousness, enough “truth”, to make one feel intelligent, intuitive, or wise for being able to see the point and agreeing with it. What is often missed, however, is the “rest of the story,” or the further facts that reveal the error or potential confusion in the meme.
This is the same ploy satan used with Eve…..half truths, cagey misdirection, suggestion that “surely God did not say thou shalt not……”, and appealing to her desire know what is known by God…….to have her own self-worth and value enhanced by knowing what God knows. For some people, being duped by a simple pattern into thinking they are geniuses is a momentary feel-good, but it may lead them to think more highly of their powers of deduction…..and mathematics…..even reality…..than is warranted.
#boycottstupidmemes