This TED talk presentation is an interesting perspective on the thinking of the religious “none’s” among us who profess spiritually- diverse, personal, self-defined and free- but disavow religion.
This young woman’s experience confirms to a degree what I have suspected. That the old ways of evangelizing people aren’t working. Instead of starting with the Gospel and the Bible, it can be more helpful to start with the felt needs of people. That is often expressed as a need for belonging, for connection to others, for hope, for comfort, for acknowledgement that it’s okay to not have all the answers. I learned the “sales technique” of discovering felt needs and offering the benefits of the product/solution in the training classes of some of the best sales training organizations in their respective industries. We share the human condition. It is simultaneously both a burden and a blessing. Sooner or later we each come up against something that we can’t figure out on our own. Some will be content with simply finding a connection with others who are equally uncertain and they will all do the best they can to comfort and encourage one another. But eventually even that connection will fail us. All such human efforts eventually end in disappointment or disillusionment and perhaps even despair. Or it leads to acceptance of the unknowable….. like the acceptance at the end of the grief process. The pain is still there but there is no longer any expectation that it will change. Or, coming to the end of our own effort to find the answers in human solutions or human connections, it provides the opportunity to make the leap into faith in God. It is there that true peace transcends our need to know “why”, hope is fulfilled, joy overcomes circumstances, and love is perfected. Instead of simply connecting, commiserating and celebrating in our shared humanity, we are invited to reach beyond our humanness and believe that beyond-human is a real place and a real state of being that awaits those who believe.
I love playing around with words. One word that I have played with, theologically speaking, is a word used frequently in the Bible…..”flesh”. The struggle for many of us as believers in Christ is the struggle between “living in the flesh” and “living in the spirit” (on “in Christ). This is a graphic way of viewing what that struggle looks like…..

Figure 1 represents what living “in the flesh” looks like when the word is written backwards and the “h” is enlarged to create a throne for one’s “self”. Self on the throne…… doing what one makes one feel in control and happy….that’s living “in the flesh”. And, if one is a believer in Christ, the place that “living in the flesh” forces Christ to occupy is a subordinate position in our lives, as our stepstool, being used to help us achieve what we want. Figure 2 represents moving one’s “self” to a position of humility with Christ seated on the throne of one’s life. That’s living “in the spirit.”

But I’ve been teaching a series of lessons based on the human condition and its implications. And I’ve been reflecting on the word “human”. In a similar manner, graphically this word can be thought of this way: 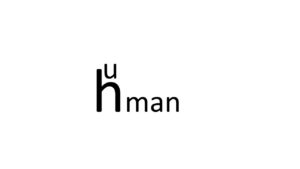 As we look at one another we see every one of us, YOU, sitting on the throne of his or her own life and from that perch looking one every other person, or member of mankind,  This described the epitome of a culture in which a self-interest based ethic has been embraced by virtually everyone.

In reflecting on what it means to be subject to the human condition, it seems that most of us eventually drift toward the same way of thinking about our humanness, particularly if one is not a believer in Christ. Though we try, few of us have the resources to claim to be our own ultimate authority on everything, though we still feel entitled to do so. Few have the wealth and power, health and strength, and supportive relationships to know all that we want to know and achieve all that we hope to achieve. Lacking the ultimate capital to be ultimate authorities over our own lives, we attempt to make ourselves content to be a part of the imperfect family of mankind, celebrating the diverse ways in which we express that, and each of us sits on our throne to the extent that we can in the midst of all of the others who do the same. As Judges 21:25 observes, “There was no king in Israel; each man did what seemed right in his own eyes.” It’s clear from the context that is not such a good thing. It was a time of great lawlessness and evil. And that’s the risk that we have in choosing to live that way. Each is the king on the throne of his or her own life in a world where we expect everyone else to do the same. This view of life in which each is her own authority and everyone is free to be her own authority, is a religion. It is humanism, exalting the humanness we share. Further, we expect that all members of this largest people group possible will all give themselves over to the best of what “humanness” means.

Unfortunately, sooner or later most members of the group, we discover, will disappoint us in some way or another and we find ourselves disillusioned with a person (who may even be us ourselves). So we dismiss that one as an “outlier” and look to the rest. Eventually, another one disappoints, then another, and another, and eventually so many that we come to suspect that there are none who are entirely trustworthy. Enough encounters with the imperfections of one after another of the members of the human group eventually leads us to the reality that “all have sinned and fallen short…”, if not fallen short of the glory of a God in which one doesn’t believe, then at least fallen short of the expectations that one has for humanity. And we find ourselves at that point of acceptance of the reality that the “ideal” is not real, utopia is not possible, and people are…… after all……”only human”. We shrug and shake our heads or we rail against a reality we don’t want to accept…..or we look for Someone Who Is Beyond Human but who can still connect with our humanness…..and he is there. Jesus. God Incarnate. He has created us for himself….to know and welcome him into the place within us that only he can fill. And in doing that, we can begin to get beyond our own humanness and find that humanness, when God is present with us, is enough until he takes us to the realm of Spirit and “only human” is just something we used to be.