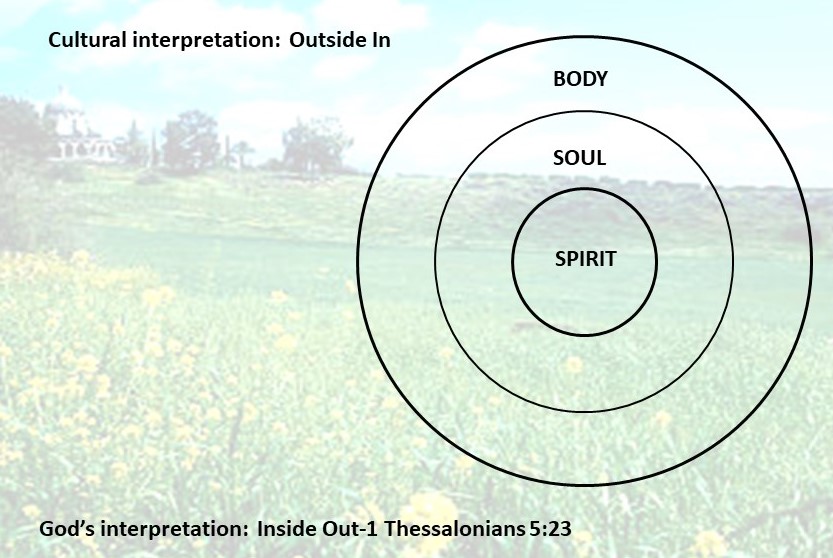 Simple Hand Metaphor for Thinking About Three-Part Human Being and How Conscience Works.

I found myself in a spontaneous spiritual direction session with someone this week. The directee was grasping for a way to understand the concepts we were discussing about the release of the power of the Holy Spirit through our spirit in a way that transforms us completely. I used my open hand. “This,” I said, “is me.”

I crossed my thumb across my palm. I said, “This thumb is my spirit. It is the operating system.”

Then I closed my four fingers over my thumb. I said, “This is my soul. It contains my intellect (mind), my emotions (heart), my will (volition), and my personality. That is the hardware of my soul. And those components are designed to be operated by my spirit.

Think about a mitten that is put over the operating system and hardware. It is like the case of a computer. That mitten or case is my body.

Between the back of the four fingers closed over the thumb, place a small object….a coin, a paperclip, anything that will reside inside the mitten or glove but outside and on top of the four fingers. That is the software…the programming, the data input, that comes into the hardware from the environment and it will determine, to some degree how well the whole system operates, although God has already put some background programming into the system that resides beneath it in the operating system and background of the hardware which is unseen unless and until he activates it and makes it known.

Now consider one more addition, a small piece of paper, like a tiny post it note flag that one would use to mark a page in a book. That is one’s conscience.

What drives the conscience depends on where it resides and what it receives from the sensory system- see, hear, touch, smell, It may reside in the space between the closed four fingers and the mitten, at the interface of the soul with the body. In that position, it is receiving its input from the physical realm, where the body and its desires are the most influential input. From that space, interfacing between soul and body, it will simply interpret data for the hardware of the soul according to the input from the physical realm and one’s own desires.

It may also be placed on the other “side” of the soul, inside the closed fingers, on top of the crossed thumb so that it is interpreting between the spirit and the soul according to the input that is coming from God’s Holy Spirit that enters into me through the intended operating system of my human spirit. Which side of the fingers the conscience is on….facing outward from the soul toward the body or facing inward from the soul toward the spirit, determines how the conscience reads and interprets the instructions to the soul. From that conscience’s interpretation, behavior is determined.

As we walk through this little metaphor of how the three-part being- spirit, soul, and body- works in coordination with the conscience and the senses, we see ourselves in a new way. We can intentionally move and redirect the conscience away from outer influences- the culture, evil and brokenness of the world, and our own physical desires- and toward the inner life arising from the Holy Spirit dwelling within our spirit. When we do this, we begin to program all the elements of the soul (mind, heart, will, and personality) to take their direction from the Spirit/spirit and mute the directions that arise from the flesh and the physical realm. How will your conscience be programmed? What programming do you want for your Self, which is defined by your soul? That of your body or of your sprit? If one has an undeveloped spiritual component, the system will default to the soul and whatever influences are coming through the conscience for its operating system, which will probably be that of the body, its desires, and the physical influences of the culture and senses.