NOTES on The Shack:

The Shack was a good movie, redemptive and insightful about the nature of good and evil, which is not to say that it’s entirely correct. The work of forgiveness was shown realistically as a difficult but necessary task. It does, however, play into what is a desire/belief of many that there is no eternal punishment for sin. “Wisdom’s” statement that “sin is its own punishment” is unfortunate (and wrong). In focusing so exclusively on the love of God, the holiness of God is overlooked.

We talk to the ladies at Titus 2 often about the nature of God, as revealed in the Bible. We’ve also talked about God “meeting us at the point of our need.” In the Shack, the need for key characters to be free of their sense of guilt and personal responsibility for tragedy due to a moment of neglect or carelessness and to forgive and be forgiven and be able to move forward is clear. It is a little too sappy in suggesting that one can have complete closure on a tragedy. Some things we simply may never understand, but we can trust the love of God, even if we don’t get our “Shack” weekend to work through it all.

There is a moment during which Sarayu (Spirit) is digging in the dirt with Mac and she cautions him about a poisonous root. He interprets that as the root being “bad”, but she points out that the poison of the root, combined with the nectar of a flower nearby creates a healing balm. That, along with Wisdom’s statement that sin is its own punishment, were probably the most uncomfortable moments of the movie for me as a Christian. It’s just not that easy to cancel out the “bad” with something else and make the two things produce something “healing.” That pushed the concept of “redemptive” a little too far. Some things are just bad, period, and need to be destroyed. Nothing is going to make them good or “healing.” But God can bring healing to the damage done by the “poison”……even though scars remain and not everything is right as rain afterward, but God’s grace is sufficient to allow us to let go and move forward.

I did like the way Papa assured Mac that God was present with Christ in his suffering and death, that Christ was never abandoned and the scars of Christ are present on the wrist of Papa, too.

Another thing I liked about the movie is the way that Mac’s childhood neighbor, who comforted him in his pain is the same “face” he saw as the character “Papa”. She had said to him as a child that what he experienced was not love. (being beaten by his Father, his Mother being abused.) I believe that for most of us, our first glimpse of the character of “God” is in the life of someone who models godliness in some way for us as children. Having such a model of some characteristics of God in our early lives nurtures our ability to know and see God later as we grow. It does reflect accurately the impact of early experiences on our understanding of spirituality, “good”, “evil” “love”, etc. Some of the questions I ask applicants to Titus are:

“Are you a spiritual person.” If yes, “What does that mean to you?”

“Who modeled for you the character of God as a child?” “Who gave you a sense of what God is like?”

There often is someone….a grandparent, a teacher, a neighbor, someone close to the child who modeled the unconditional love and grace of God to them!

There’s also a sad substory of the pain of evil/dysfunction that is passed from one generation to the next in families….

In the final day of Mac’s Shack experience Papa appeared as a wise old Indian, to guide him through a part of his journey, forgiveness of the murderer and the discovery of his daughter’s body. Papa said Mac needed a Father for this part…..rugged, strong, able to do what needed to be done in spite of the pain? Not sure exactly, except that Mac would have the responsibility for taking his daughter’s dead body back….bringing the “closure” he sought. Titus 2 ladies and I have discussed the Trinity somewhat like this…that God is unchanging in character, though the aspects of God that we see and the Person we see of the Godhead in any circumstance depends upon our need in the moment….a strong, disciplining, almighty, omniscient and omnipotent Parent who provides approval and who pushes us onward toward what we must do….a companionable, understanding Partner/Companion/Brother who shows us how to do what we are supposed to do and does it with us…..and a comforting, equipping, instructing Presence that molds our conscience and is present with us always. Each representation of the character of God is true and meets what we need in that moment. But our needs will change and God’s self-revelation in Scripture, in nature, through the lives of others will continue according to our readiness to see and the need, both of which God already knows. “Then their eyes were opened and they recognized Him…” Luke 24:31

One last observation on The Shack:

God’s independence of time and space was also represented well in The Shack…We discover that Mac didn’t “almost” get hit by a truck as he drove to the Shack…he DID get hit by the truck and was physically in a hospital bed during the entire weekend, never having physically gotten to the place he was going. But in soul/spirit he was taken there to meet God where he confronted his grief, guilt, fear and pain and received comfort, knowledge, and closure. I experienced something similar one time….being in the presence of God in soul/spirit while my body, I am told, continued to be present in a physical way, even interacting with others in ways that I don’t recall. Suddenly I “awoke” to being in the physical presence myself and with others and my time in communion with God, whom I only heard but did not see, was over. My soul/spirit experience was in a “place” that I could later describe to my counselor, along with my reaction to that brief time in God’s presence. What God said to me there, and how I responded, led me into discovery of some things about myself and God as my counselor and I talked about that experience.

God was not present with Christ when he was dying on the cross because Jesus took on the sin of the world. God is holy and cannot be in the presence of sin therefore Jesus came to redeem us. Mark 15:34. Why hast thou forsaken me ?

Cathy Byrd replied:   I appreciate your comment, but I do not agree. Christ was quoting a Psalm from the cross that speaks of one’s emotion of feeling abandoned something that many people, in their humanness feel. It is not a statement of the reality of God’s absence. It is testimony to Christ’s humanity. Jesus is God. The Holy Spirit is God. The Holy Spirit does not leave one even though sin occurs, though he grieves the sin. God is present in the world even though sin is present. God’s holiness changes the world. The world does not change God’s holiness.

Rhonda Wood Flick:    The Holy Spirit is here with us on earth that’s why Jesus said if I do not go he will not come God is in heaven and Jesus s his right hand

Rhonda Wood Flick:   If you would like I’ll send you more scripture that proves that God cannot be in the presence of Sin The shack is full of heresy

Cathy Byrd:     Please do. Those who are not “pure” will not SEE God. It doesn’t mean God’s not present. It means they won’t be able to see God;s presence or his work in the world. Matthew 5…blessed are the pure in heart for they will see God. He hates evil. But in his love and grace he is always present. Jesus (God) was present with the two from Emmaus after resurrection but they didn’t recognize him….Their eyes were opened.

Cathy Byrd:    One of the fundamental attributes of God is that he is omnipresent (as well as omnipotent and omniscient). He cannot be omnipresent and present only where sin is NOT. So which is the true character of God? 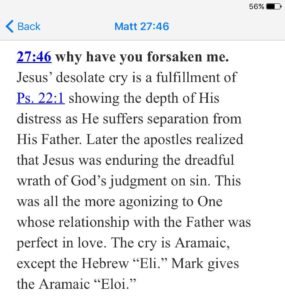 Cathy Byrd:     Rhonda Wood Flick Source please…is this footnotes? which Bible…commentary? Whose?. I still say the FEELING of desolation and abandonment by a person doesn’t mean it is actually desolation and abandonment in reality by God. . If Jesus had stoically and unfeelingly endured the cross, would mankind have known and believed that he was fully human/fully divine and found comfort in Christ being IN ALL WAYS the great high priest who intercedes for us and having endured all that we endure in life? Physical death is the result of sin for all humanity. Such debates are of little value in the long run. Each person can decide such a things as this, it seems to me. The FACT of Christ’s atonement on the cross does not require me to know exactly how he felt or what God’s own character allowed or did not allow. Jesus’ mother was there at the foot of the cross. I would believe that God would not be far away either! Jesus, being God Incarnate himself could not “abandon” himself…he could only surrender his human spirit to death, as all other humans do.

Cathy Byrd:      How do you respond to the Apostle Paul’s statement in Romans 8:38 I am persuaded, that neither death, nor life, nor angels, nor principalities, nor powers, nor things present, nor things to come, Nor height, nor depth, nor any other creature, shall be able to separate us from the love of God, which is in Christ Jesus our Lord. and in Romans 7:18-19: For I know that nothing good dwells in me, that is, in my flesh; for the willing is present in me, but the doing of the good is not.

For the good that I want, I do not do, but I practice the very evil that I do not want. What is Paul, in his own recognition of his sinfulness as part of the human condition saying about God’s steadfast loving presence with us? And would the weight of Jesus bearing the sin of all humanity be the difference? And yet we say again and again that even if any one of us had been THE ONLY ONE in need of salvation, Jesus would have done the same thing….for the sake of the lost 1 !

Kathleen Pilcher Vance:    It is fiction, not theology.

Cathy Byrd:     Yep. It doesn’t keep people from glomming onto it, though, or alternatively being afraid of examining it. “Folk religion”…..that gives people what they want to believe…no hell, no judgement. Everyone goes to heaven. Universalism…not new. But not biblical, either.

Cathy Byrd:    And from what I’ve read of the author he did have some theological biases to promote.

book, has the ability to reach a great many people, whom are not at your spiritual level. It acts as a seed planted to help start the spiritual growth, many of you on this page have already achieved. Please keep this in mind when giving you book and movie reviews.

Chris Michelsen Corry:    Such an interesting discussion. I’ve had mixed emotions about the book, & haven’t see the movie. I agree with Danny that it can plant seeds in some people, but worry that it (they) may lead people down the wrong path.

Maxine CarterL     I read the book, got nothing but confusion out if it, NO DESIRE TO SEE THE MOVIE.