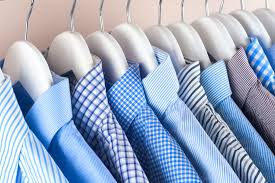 Another laundry day activity was ironing. My mother would starch the shirts of my Daddy and brothers and some other items, roll them up and put them in a basket in the bottom of the refrigerator until she had time to iron them. Sometimes I would iron them, especially as I got older. There was something peaceful about ironing. And seeing the smooth fabric as the wrinkles were ironed out, smelling the starch, and feeling the heat as I buttoned them onto hangers was a satisfying sense of accomplishment.

Over the years newer synthetic blend fabrics and changes in styles virtually eliminated the need for starch and ironing in most households, including ours. When Bill was still employed in broadcast management, though, he generally wore 100% cotton custom-tailored white dress shirts that still had to be starched and ironed or sent out to the cleaners. I have ironed them many times, but with a convenient can of spray starch and a steam iron.

There was a time when I was mentoring a younger woman who voiced a complaint about having to iron her husband’s shirts. He was prone to complain if his “favorites” were not hanging neatly, ready to wear as he dressed for work. I shared with her my sense of satisfaction in ironing Bill’s shirts, having him look nice and well-cared-for. Such care for our husbands’ appearance is an indication of our care of them in other ways, too. And standing at the ironing board with my hands going through familiar motions with little thought was also a good time to pray for him and other needs. She seemed surprised that I could actually enjoy ironing. It became a bit of a joke between us ….I would tell her when it was time for me to iron and she would laugh. But I do think that something of our conversations about ironing made an impression on her and she became more aware of her attitude toward her husband and less inclined to complain about doing things for him.

As we have both grown older and stayed in touch I think we have both begun to realize that there is likely to be a time when we will not have our husbands around to serve in such ways. And there will be something profoundly sad about not having his shirts to iron. In the day that I should have to remove his clothes from the closet to pass along to others, I will hug the shirts to my face and through the tears I will smell the familiar smell of the one I loved and served in small everyday ways.

Ironing, like many other things in life, is what you make of it. What is the purpose? Who benefits? What does it say about what I value?