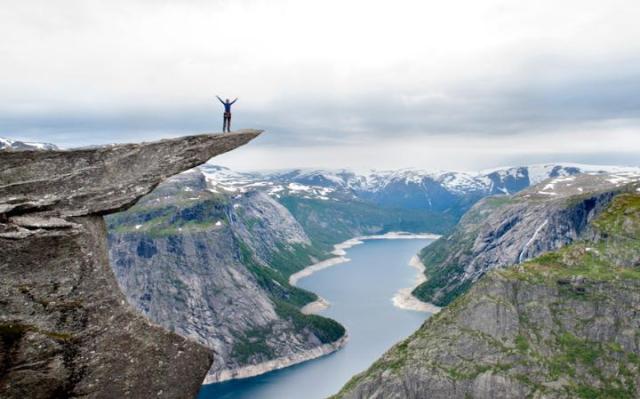 Dr. Sandra Richter, in her “Epic of Eden” book and study, offers a metaphorical image that sets the stage for studying the Old Testament as a whole. She used the image of a someone falling off of a mountaintop, landing at the bottom of the mountain, broken and unable to help himself, in need of rescue. So one can think about the Creation story, Adam and Eve in the Garden of Eden, as the peak of God’s creative work, and his plan for humanity to live in that perfect realm with him. But because of mankind’s free will and the choice by our first spiritual parents to yield to temptation and disobey God, they fell from that lofty existence and all of humanity’s hoped-for future fell with them. But God did not abandon them. He put into place the long and intentional path of restoration, marked by stages of rescue, as humankind developed spiritually, morally, and socially. The steps in the restoration of humankind have occurred much the way the restoration of a fallen mountain climber would occur. The restoration would begin with locating and stabilizing the victim, extracting him from the site of the disaster, transportation to a hospital ER, triage, multiple operations over time, post-op recovery phase, transfer to rehab, physical and occupational therapy, restoration to wholeness, and eventually, readiness to resume mountaintop living …..

The incremental notion of restoration was made clearer by her detailing of 5 primary OT eras, each one marked by a key OT person- Adam, Noah, Abraham, Moses, and David- all leading up to and preparing the stage for the ultimate restoring era of Jesus…..

With each OT era, further progress was made in God’s redemptive work on behalf of humanity. The era of the NT and Christ’s life and ministry, death and resurrection, and the Holy Spirit’s dwelling brings all of humanity ultimately to the point of readiness to dwell in the New Heaven and the New Earth.

It is a beautifully simple plan. But it takes centuries to accomplish and progress is sometimes slow.

As I have contemplated her metaphor and the 5 key OT eras, I have recognized additional aspects of the work of God, the presence of a Red Thread of Grace and Glory that God has woven through this story of God at work in his created world.

Take a look at the image that results from this view of the redemption of humanity from the perspective of a mountaintop disaster and the incremental progressive recovery. (See Diagram 1) 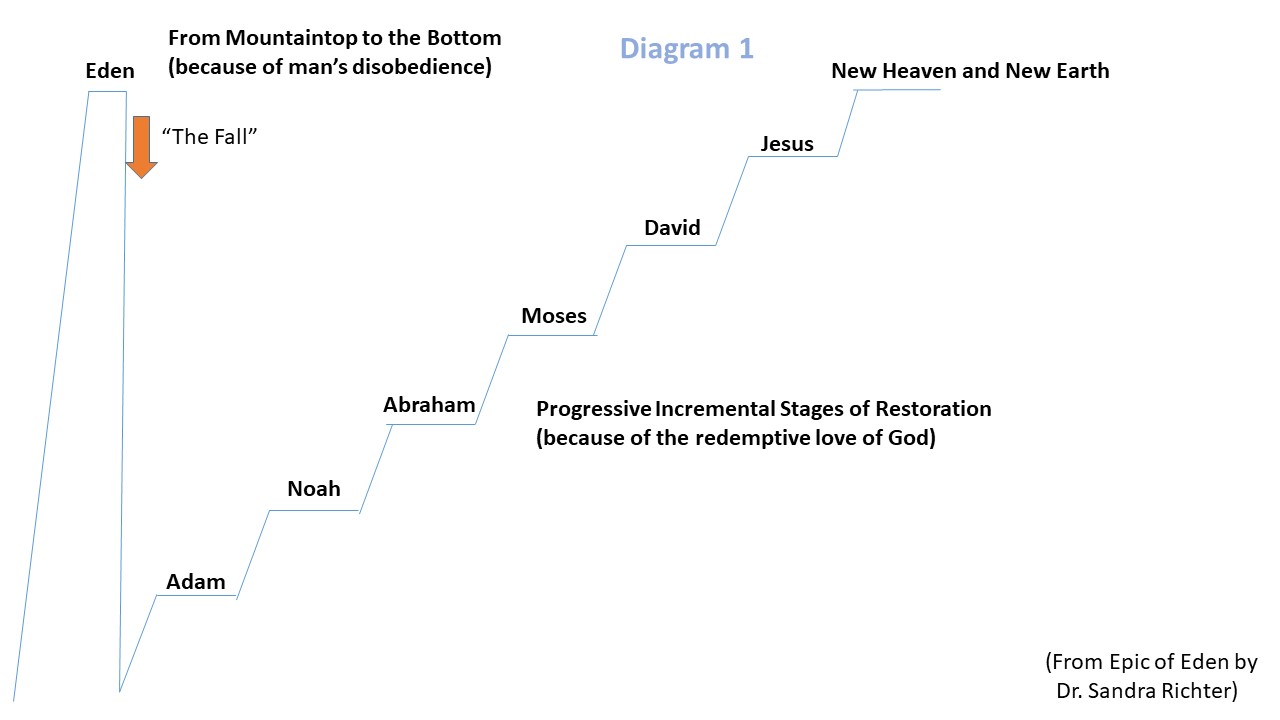 Each OT era reveals God working with larger groups and toward more sociological and theological complexities.

Also, however, within each era certain things remain the same- humankind’s tendency to rebel or disregard or disobey God’s Word and God’s steadfast patience and mercy toward his wayward creation.
With Adam, God is dealing with an individual man and his wife. Their disobedience has forced them out of their home into an existence that will be marked by labor, pain, and loss of the intimacy they had with God. God, however, sought them out , provided for their immediate needs, and continued to watch over them.
After further deterioration of humanity’s conduct and inattentiveness to God, God cleared the Earth and provided a means of restoration through the family of Noah.

With further development, God worked through Abraham and the patriarchal tribal structure that emerged with the expansion of civilization. The story of Abraham and Lot, Abraham’s sons Ishmael and Isaac, later generations of Jacob and Esau, and their travels, we see God’s redemptive work during this additional formative stage of faith, social order and the economic development of humanity. The centuries in Egypt that began with great hospitality, enabled the tribes of Abraham’s descendants to flourish and grow, so much so that the Egyptians felt threatened by their presence and prosperity, so the Hebrew people were made slaves instead of welcomed guests. The increasing oppression they experienced set the stage for the next era- the exodus led by Moses.

Moses’ era brought new socioeconomic developments for God’s people, broadening, stabilizing, and preparing their group identity for the next significant era. Their years of wilderness nomadism and the size of their tribal cultural group brought about the necessity for greater trust in God, for more organizational structure, delegation of authority, more diffuse governance spread out across the tribes, development of more diversified vocational skills beyond that of herding – military, priesthood, courts, craftsmen, and more.

With the stabilization and diversification of the Mosaic era, the people were prepared to move into the land, secure it by military means, and begin settling in the land God had promised their forefather, Abraham, over 500 years earlier. God’s people began the era of nation-building and moved from the patriarchal leadership model to a theocratic nation with leadership by a king who received support for guiding the people from prophets and priests. The family dynasty of King David became the means of further establishing the stability, identity, and reputation of God’s people and became the family tree that would give birth to the Christ, fulfilling the many prophecies and promises of God.  (See Diagram 2) 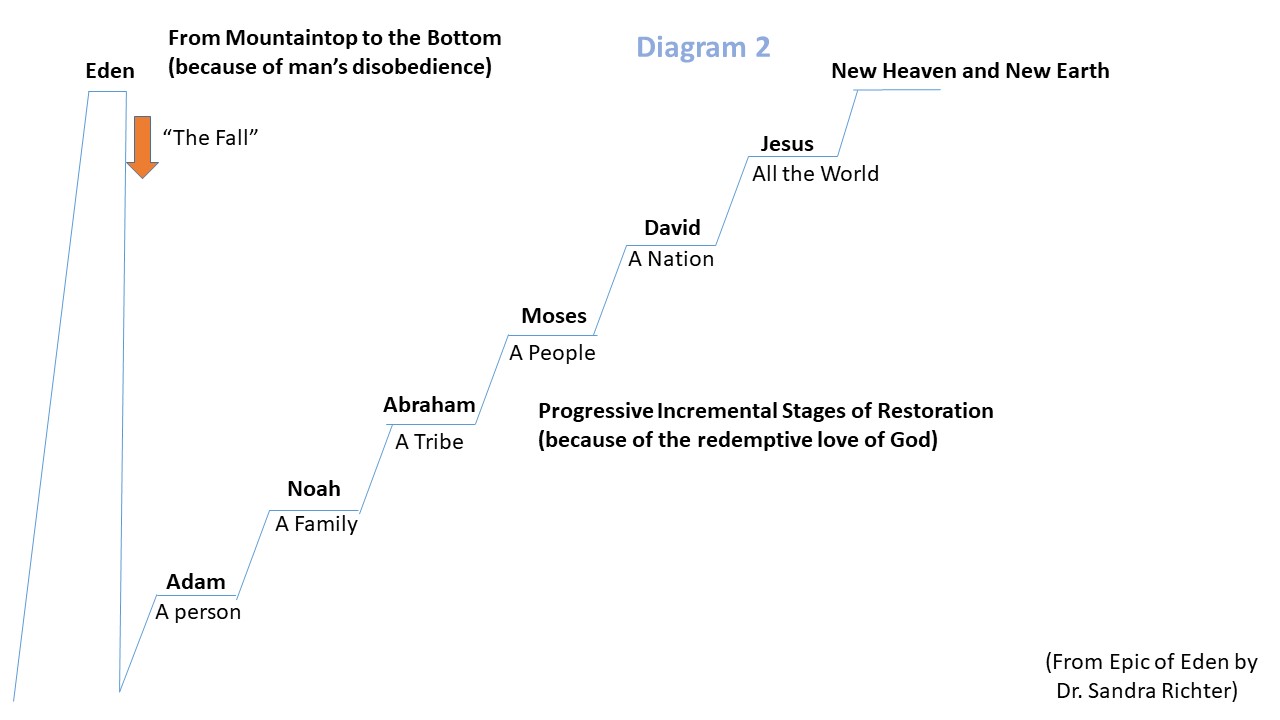 With the era of Jesus Christ, the final phase of the restoration of humanity is accomplished. Additionally, as one observes the life and teachings of Christ, he demonstrates, too, the progressive, increasingly inclusive nature of God’s plan for restoration of all humanity.  But the era of Christ and the ultimate restoration of all of creation, like the other eras, is a long term stage.  (See Diagram 3) 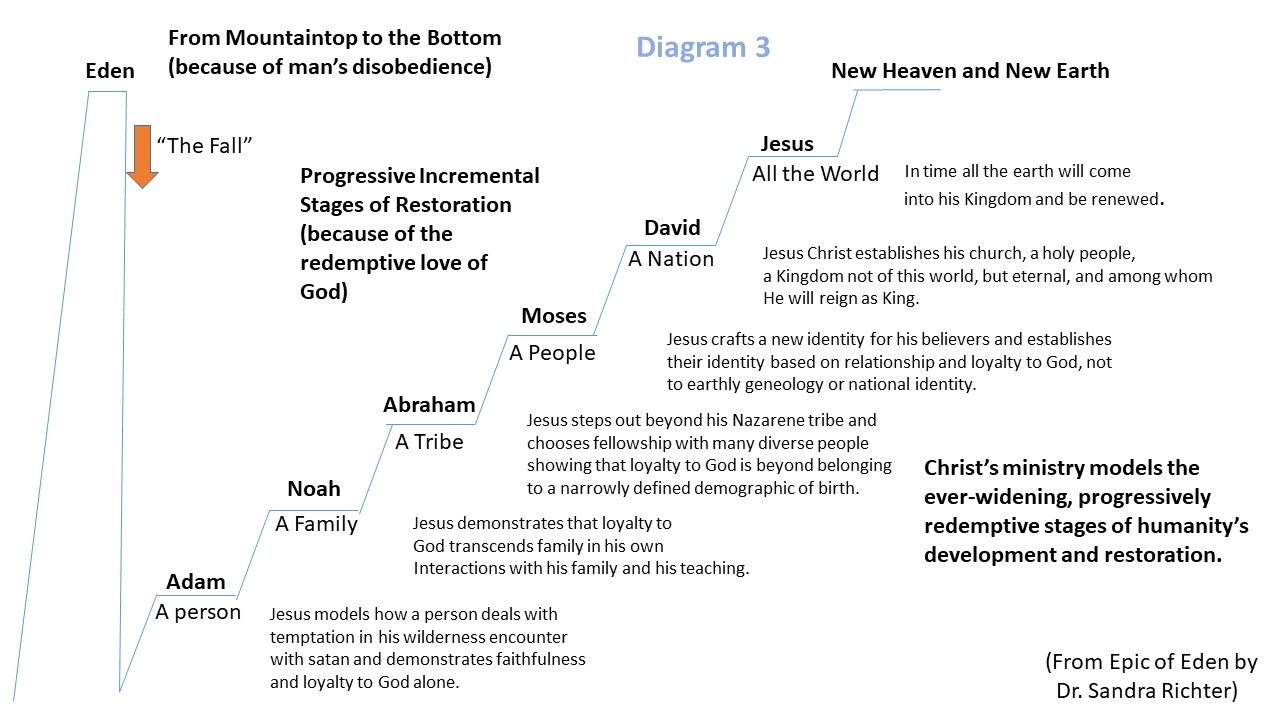 When one sees God’s redemptive plan compressed this way into a series of historic stages, one can see the elegance and beauty of God’s work, bringing humanity to a point of readiness to be restored to that Eden-like existence for which we were created. God will not fail to complete the good work he has begun!  And we will see the epic of Eden completed.