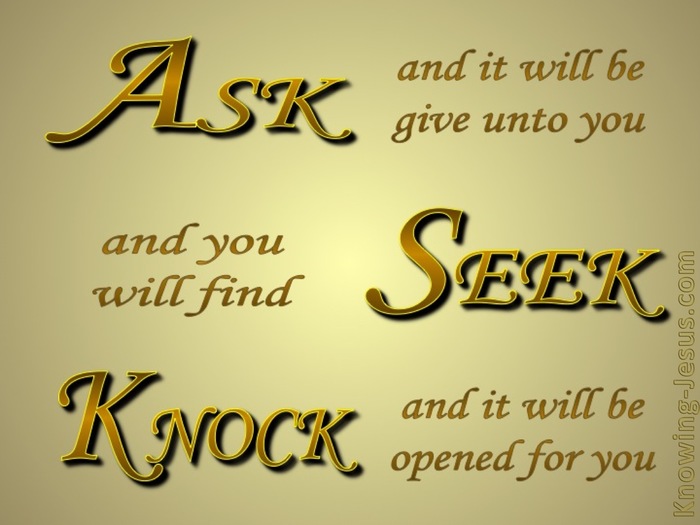 One of the first times I really had Scripture leap off the page and impress me with a deeper meaning was with the verses in Matthew 7:7 -8: (See also, Luke 11:9-10)

This was long before the notion of vocational ministry or seminary were in my mind. It was with these verses that the Lord introduced me to the concept of progressive movement in scriptures that to many might simply appear to be repeating the same thought ….. In this case, the verse moves from a casual verb of request or curious inquiry, “ask, to a more intentional pursuit of something about which one knows and which is desired, “seek”, and finally, to the readiness to take that which is prized and has been found, “knock”.

Ask. Seek. Knock. These directives have to do with the matter of prayer and movement from the lesser to the greater. Jesus is providing instruction on how to secure for oneself the blessings of being a child of God…..simply begin by asking. Elsewhere, disciples are told to “ask rightly” (in keeping with God’s will) and, if they do, they will receive it.

With action in obedience to each one of these verbs one demonstrates a greater assurance, a bolder confidence, about what it is that is sought and reflects a growing awareness of the value of that which is being sought. From curiosity and hoping, to dogged pursuit, to confidently securing the valued treasure. What is this treasure? It is dwelling in the Kingdom of God, where membership is the privilege of children of God.

This progression points to a maturing process in prayer to the point that we can come boldly before the throne with every expectation of receiving that for which we have asked. As one continues in the process, she learns along the way what it is that God desires for her to have and is are eager to receive it, as well.

This was an important lesson in biblical principles expressed through its style and language and the power of the Holy Spirit to lead one into understanding. Since that encounter with the Word, I have been blessed to receive other insights that God has shown me as I have studied.

English poet/writer Samuel Taylor Coleridge (1772-1834) said, “The words of the Bible find me at greater depths of my being than any other book does.” I am in agreement with Coleridge.