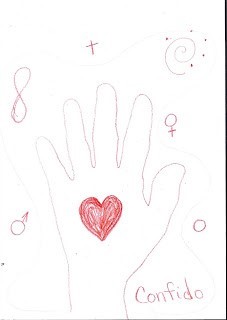 While in a psychology class, one of the assignments was to draw a picture that represented one’s life. I drew the doodle shown here.
The hand with the heart represents, for me, God’s love and
providential work in my life. The other symbols are medical symbols for “man” (lower left), “woman” (middle right), “birth” (lower right), “death” (cross at top), and “infinity” (figure eight top left which also represents eternity). The spiral is a doodle I have often drawn, but I didn’t have a specific meaning for it, except that I have tended to think of the experiences of my life somewhat like a spiral
staircase – often repeated but with increasing understanding
and insights resulting with each repetition.
Tonight I decided to research the symbolism of a spiral. I found that the spiral is considered the oldest symbol of human
spirituality, representing our inner and outer journey to God. Paula Vaughn, writing in an article entitled “A Glimpse of the Spiral as a Symbol for the Transcendental Mystery of God”, says “Spirals symbolize our soul, our essence, remaining the same while experience deepens and elevates our egos, or personalities, simultaneously…..The unfolding of the spiral is the soul unfolding upon itself time and again throughout our lives.” Another writer stated that it is an ancient symbol for life’s energy force and power. The fact that I drew my spiral curling counterclockwise would indicate a movement away from the conscious and toward the unconscious, or toward “otherworldly, heavenly” dimensions, according to some interpretations.
In my drawing I drew a line throughout the field, weaving in and out among the symbols. When I considered the line, I realized I’d placed the hand, infinity symbol, and the spiral inside the line. The man, woman, birth, and death symbols were to the outer side of the line.
Some prior research on my birth family had led me to discover years ago that the family motto is “Confido” , meaning “I trust”. In my life sketch I had placed the “I trust” motto within the line, along with the symbols associated with God, eternal life, and spirituality.
Carl Jung, the founder of Depth Psychology, studied symbols, dream analysis, and spontaneous artistic expression as a means of enabling people to heal. He believed that symbols appear when there is a need to express things that are only known in our unconscious or cannot be expressed in words. Jung’s study of universal symbols, shared by cultures across ages and geographies, led him to the conclusion that the relationship between these “archetypal symbols” and humanity suggest the possibility of a pre-existing, ancestral, genetic “at the dawn of humankind” natural, cosmic intelligence that we call God.
As Paula Vaughn notes, Joseph Campbell stated that God as Creator lies deepest within the well of our identity and that contemplating his existence is what makes us one with the transcendent, ultimate reality. Like Jung, he believed that if you find the inward thing which you are then you have discovered the “truth”……..She says there is one symbol that universally proclaims the absolute reality of a path to God: the spiral.
The spiral is a recurring natural phenomenon. It can be seen in the coil of a snake, in the unfolding frond of a fern, in the whirling winds and clouds of a hurricane, in the cochlea of the ear, in the shell of the nautilus or snail, in the brain, in our fingerprints, in the spiraling shape of the Milky Way, and even in the double helix spiral of the DNA of all living cells. Vaughn says, “Spirals in nature, the body, brain, and soul reflect our kinship with God…The spiral represents the cyclical ebb and flow of God’s energy that is always moving the collective mind, body and spirit of humanity toward balance and health.” It’s interesting to me that I would have unconsciously and spontaneously taken the five medical symbols and added to them a spiritual symbol for healing and my own personal representation of God’s action in my life.
I like my drawing. And I do think it is representative of my life. It’s nice now to have the time to go back over some of the work I did in graduate school and reflect on it.