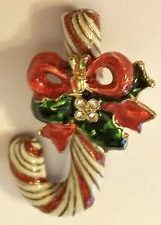 The Legend of the Candy Cane is published as a Christmas story each year in various incarnations, reportedly originating in various venues and during various eras. The symbolism is sweet and sentimental and often delights children. Such evangelegends can take on a life of their own and be repeated again and again as absolute truth.

King Leo Peppermint sticks were a Christmas treat every Christmas when I was growing up. It is nice to see that they are still available from this description of them at the King Leo brand company, qcandy.com:    “Declaring a brand of candy as the “King of Peppermint” is a bold statement, but then again, not many candy brands can say that they have been producing the same peppermint stick candy for over 100 years. King Leo® pure peppermint stick candy was developed and trademarked in 1901, it is thought to be the longest continuously sold brand of peppermint candy in the country.”
One of the more common brands of peppermint in the south is Bob’s Sweet Stripes. This story of the Bob’s Candies, from Albany, Georgia, near where I grew up, gives additional information on the rise of the peppermint candy’s popularity at Christmas.

“In 1919 Bob McCormack began making candy canes for local use and sales in Albany, Georgia, and by the middle of the century his company (originally the Famous Candy Company, then the Mills-McCormack Candy Company, and later Bobs Candies) had become one of the world’s leading candy cane producers. But candy cane manufacturing initially required a fair bit of labor that limited production quantities. (The canes had to be bent manually as they came off the assembly line in order to create their ‘J’ shape.) It was McCormack’s brother-in-law, a Catholic priest named Gregory Harding Keller, who came up with the solution: Father Keller invented the Keller Machine that automated the process of shaping straight candy sticks into candy canes.”

However the bent candy canes originated and no matter how one creative writer after another has embellished the lore of the candy cane, it can be a lovely reminder of Christ. Several years ago I saw a friend wearing a candy cane pin in the “J” initial configuration. It appeared to have been made to be worn that way. I began looking for one, given my penchant for wearing Christmas pins of all kinds- trees, wreaths, magi, winter cardinals, presents, etc.  For a candy cane pin to be worn as a “J” monogram it must be bent to the right.  You’d be surprised how many candy cane pins are bent to the left and therefore, may not be used that way.  Also,  if one is embellished with ribbons, the ribbon’s tie ends conventionally would be expected to point downward with the bow at the top.  Those are pretty stringent demands, it seems, for a candy cane pin!  Finally, this year I found what I was looking for….. a monogram “J” candy cane-themed pin bent to the right and  with a ribbon tied in the right direction!

I saw a “news” (or fake news) report about a famous person who wears an upside down cross. I’m not sure what the point is of such a statement with one’s accessorizing, but it didn’t strike me as helpful. It reminded me of how long it took me to find a candy cane pin that was properly configured to accomplish the message I wanted to communicate. LOL! I’m a bit of a snob about my Christmas pins! But more of a snob, I think, about the message of the Gospel that I communicate, in words or accessories, should be accurate and understandable. Sometimes it works. Sometimes it doesn’t. Felicia Mollohan’s poetic observation works for me.

Christmas Candy Cane Poem about Jesus
Look at the Candy Cane
What do you see?
Stripes that are red
Like the blood shed for me
White for my Savior
Who’s sinless and pure!
“J” is for Jesus My Lord, that’s for sure!
Turn it around
And a staff you will see
Jesus my shepherd
Was born for Me!