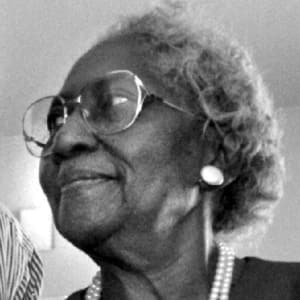 Early in my young adult life I was taken in by the courageous, persevering women of the Civil Rights movement in Montgomery, Alabama who became spiritual mothers to me.  They worked through many means, including the League of Women Voters where I myself volunteered and studied how to change the world, one person alone, one task at the time, in the face of overwhelming opposition, standing only in the name of what’s right and good and fair (as exemplified in the life of Christ for nearly every one of us, though some of our sisters were Jewish and others were Universalists, and some were even atheists.). And all of us, at the same time, were trusting that the same passion and commitment existed in the hearts of others who were doing the same, but each in her own way. We all walked the same road for a period of time but the journey was each one’s own and each had to possess her own equipping of character, strength, and faith to continue.

I sat over lunch many times with Johnnie Carr, who was part of the Montgomery bus boycott and brought the court challenge that gained her son the permanent distinction of the first black child in white Montgomery County Schools. I observed her gentleness and unqualified love and acceptance of everyone, no matter how they treated her. I saw her love for me reflected in her beautiful grey eyes and face wrinkled in a permanent look of true meekness and joy.

I saw the respect and deference people paid to Tessie Nixon and her husband, E.D. Nixon, who faced hostile persecution from those sworn to public protection on the Edmund Pettus Bridge in Selma, Alabama in the Civil Rights March of March 7, 1965.

I paid private tearful tribute at the memorial marker of Viola Liuzzo on the roadside of US Hwy 82 near Lowndesboro, where she, a young white mother from Michigan, died from gunshot wounds for the ‘betrayal’ to her race for shuttling tired marchers to rest. No one shared my grief or comforted me there except Christ Himself.

I stood in reverent and humble awe of Rosa Parks, a diminutive little seamstress who, on a fateful bus on Dec. 1, 1955, refused to accept someone else’s attempt to diminish her value as a child of God. I was barely learning to walk when it occurred.

I stood with the daughter of Clifford and Virginia Durr, who came to Rosa Park’s legal and moral defense, to register voters and lobby for good government policies and practices.

My own little frame shotgun style 1920’s era house at Dupont St. and South Cloverdale Park in Montgomery was briefly seen in a movie, The Long Walk Home, that told the story of that time in the Civil Rights struggle.

I sat in a pew in the little Dexter Avenue Memorial Baptist Church in downtown Montgomery and felt the presence of those who stood there fearfully, but determined, having done all, to stand.

I have prayed for and sought to love and befriend some angry and hard people who hated and dismissed me as incapable of understanding them and their ‘folk’ because my skin is white.

I stood with tens of thousands at the MLK Memorial as Julian Bond spoke words of dedication on November 5, 1989.  The fountain containing those famous words from Amos 5:24, “But let justice roll down like waters, and righteousness like an ever-flowing stream”, and the names of the martyrs of freedom was consecrated to the memory of Martin Luther King at the memorial to him and his movement in Montgomery.  I have returned several times to run my fingers across the names and feel the waters of time that bring sometimes slow healing. 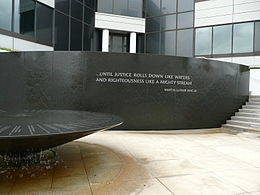 I took my father to task in the early 1970’s with determination to protect my own children from the careless disrespect of a word we’ve come to call merely “the ‘n’ word”, telling him that if he used it again in the presence of my children, I would not bring them back to his home. To his credit, he apologized for his culturally excused discrimination and was a wonderful, intentionally fair and just example to me and my children.

I’ve never been discriminated against in any significant way. I’ve never suffered persecution. I live a prosperous, blessed, middle class lifestyle. I happen to be white, but many blacks live similarly. But I learned the lessons from those who fought injustice, black and white. I have seen the pain. I have grieved for the injustice that others have suffered. But I have also seen the perseverance, the trust, the confidence in the timing and purposes of God.

Through it I have come to understand that even injustice and suffering can glorify God. I am a Romans 8:28 Christian. Though our experiences may be different, we travel the same road. My ears are alert, my eyes are open, my heart is wide, my hands and feet are Christ’s. My mind is seeking His guidance in the Word.