When my husband, Bill, died in August 2020, we had six pets- three dogs and three cats. The oldest dog, Tiger, a pug was almost 15 years old, mostly deaf, with vision reduced due to cataracts, and periodic problems with hip dysplasia.  He had to be put down the week Bill had gone into the hospital.  After Bill’s death, I could not manage all the menagerie alone.  One young cat, Simon, returned to a friend from whom I had gotten him.  She was unable to care for him at the time, but was now in a position to take him back.  Another cat, Kitty, our most recent acquisition a year earlier went to live with Tyndall Air Force gentleman.  Daisy, our beagle, went to live with our granddaughter’s inlaws in Baltimore, a relocation that was accomplished by our son driving her up there over a weekend.  That left me with Winston, a part pug, (about 10 years old) and Minnie, a one-eyed rescued cat (about 7 years old.) This week brought some Facebook memories up of our acquisition of Winston.

Bill and I went to Alaqua Animal Refuge this afternoon to pick up Winston, a new buddy for Tiger.  He is a 5 year old pug recently diagnosed with diabetes.  His owners surrendered him because they couldn’t take on the cost of care for a chronic condition like diabetes.  Bill and I are comfortable with the issues and have a wonderful vet, Dr. Bo Bergloff, who will help us manage his insulin and blood glucose.

Here’s the photo of Winston from the Alaqua website that caught our attention.  Then when we read about his history and recent diabetes diagnosis we knew he would be a difficult case to foster or adopt out. 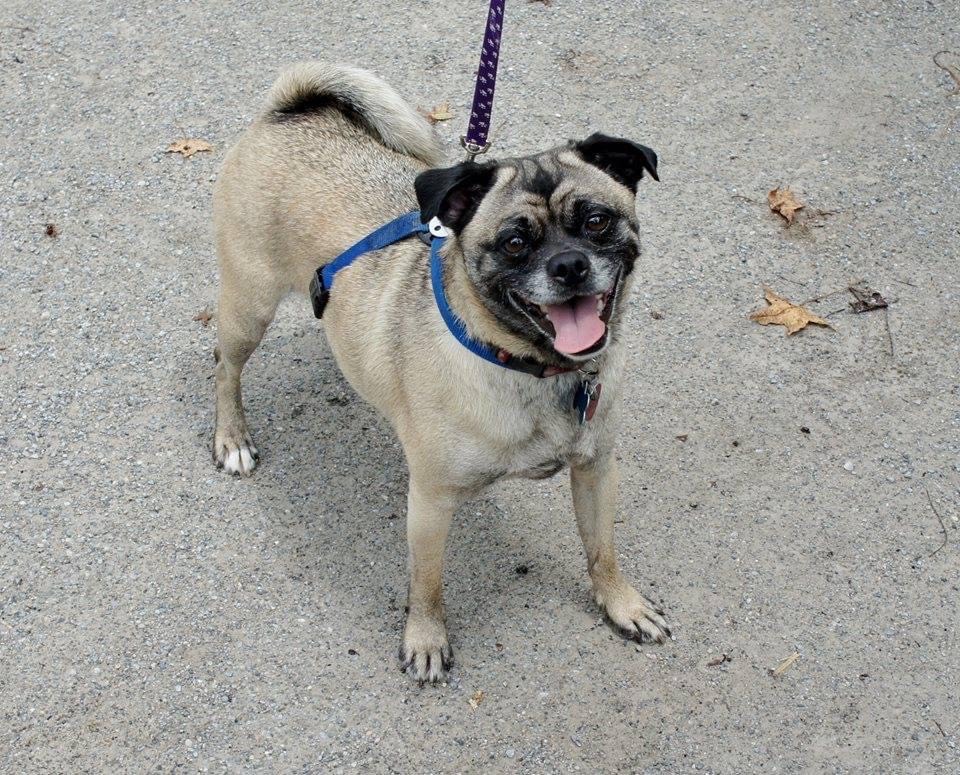 When the vet walked in with Winston to introduce him to his new family, it was Dr. Amy Williams, who had been a suite mate of mine at Auburn University at Crockett Dorm on Cox Street in 1971.  Amy was starting vet school and I was a freshman.  I have seen her only one other time in all these years….when I was a veterinary pharmaceutical rep calling on the vet school at Auburn in 1994 and she was on staff at the large animal clinic there.  It was a nice moment for both of us!  I would have recognized her kind face and gentle voice anywhere.  She said she was relieved to know who Winston would be going home with.  And she had talked to Dr. Bo and knew Winston would be well loved and cared for!

Applied mathematics skills are important!  They can be extremely helpful in decision making and weighing value.   When we picked up our new little diabetic pug, Winston, the veterinarian told us he was on 14 units of insulin daily.  Bill went online to price the insulin.   It was about $40 per bottle.  We got a little confused, though, thinking it was 40 units a bottle….which would mean $40 every 2-3 days- about $600 a month.  For a moment we thought, “No wonder the last family surrendered him after he was diagnosed saying they couldn’t afford a sick dog.”   Then Bill examined the fine print again and said, “Wait a minute.  There are 10 milliliters per bottle and each milliliter is 40 units…. A total of 400 units per bottle, not 40!” So 400 units divided by 14 units per day is about 29 days from a bottle of insulin, about $40 per month!

So, give up a couple of lunches out a month to cover the cost of the pup’s meds!  We’ve been on an expense cutting campaign recently any way…eliminating the AT&T house phone and going to a “free” Magic Jack phone that uses the computer broadband.  (Savings: about $40/mo).  Switched from one media provider to another and cut nearly $100 per month for the next year.  We didn’t know we were making room in the budget for Winston, but that’s how it worked out!  With his sweet little personality and obvious contentment here, we figure he’s worth it! 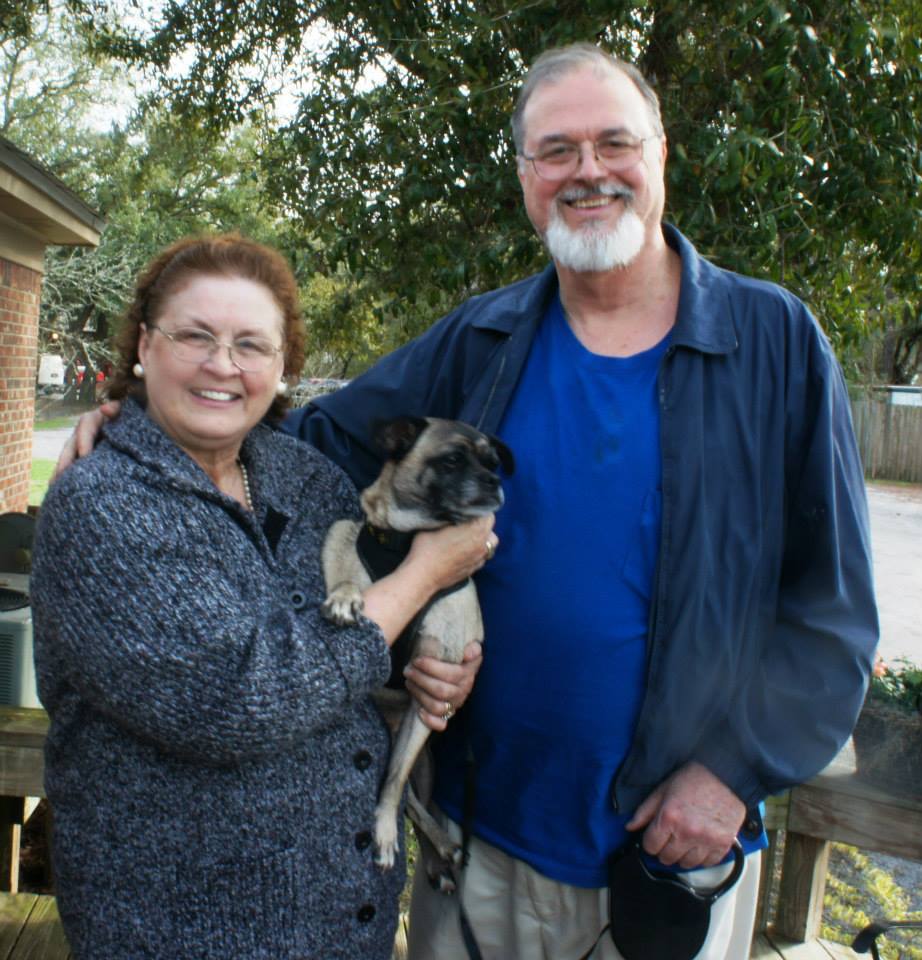 Bill snapped a “us-y” of him and Winston on the way home from Alaqua. We had been considering getting a younger dog to keep Tiger company and get him moving around more.  It worked. Tiger is playfully engaging with Winston. 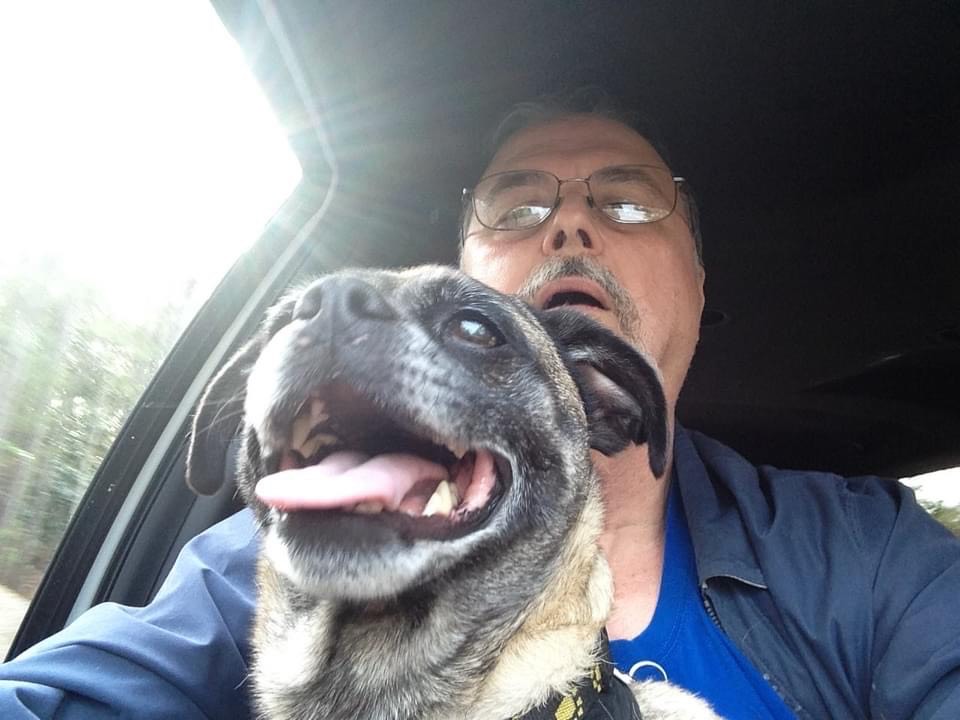 Then after getting acquainted with the household and after everyone settled down, Winston found “his” place….on the foot of my recliner between my knees.  Bill thinks he must have been attached to a female owner and will be my companion.  Or maybe he just observed my interaction with Dr. Amy and decided she was giving him to me! 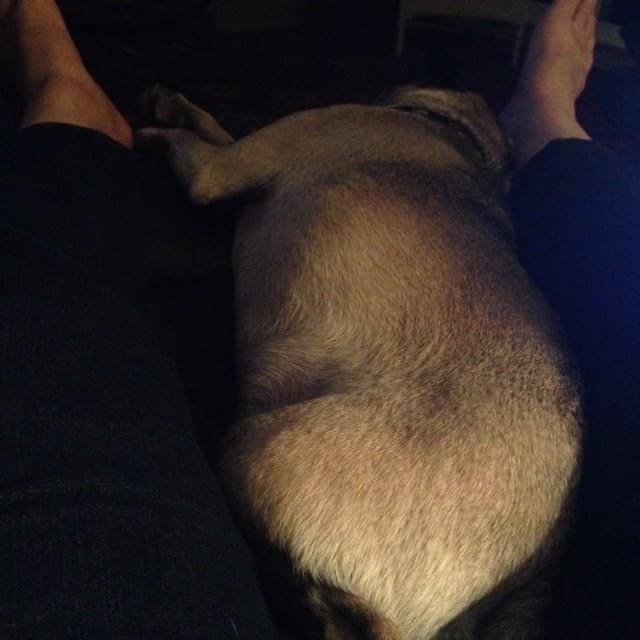