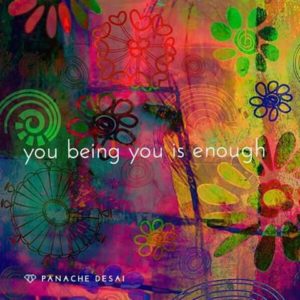 Seeing this picture on a friend’s Facebook page reminded me that there was a morning last year when I was in prayer and I clearly felt the Lord speak to my heart the word, “Enough.” That was all. It has not been that unusual for me to hear a single word from the Lord in my heart and mind in response to prayer. When the word from God is so brief, though, it is not always easy to know exactly what it means. That morning I was not sure what it was that was “enough.” I was praying for direction in a particular matter and asking the Lord if I was to simply cease my efforts in regard to that matter. That’s when I heard, “Enough.” As I prayed further about what “Enough” meant, I felt at peace and content. I could cease my efforts in that situation and let it go. I realized that life simply as it is was enough. God was enough. I was enough. Over the next few days the situation took some interesting turns that I had not expected or initiated. All of a sudden the direction changed entirely. I asked God again for clarity on what I was to do. Once again, in prayer it was clear that I was to do nothing. I had done enough. God had this.

There was a similar moment as I stood on my front porch early one morning in 1997, watching the day break, praying, realizing God wanted to do something with some circumstances of my life.  I was asking God what he wanted me to do.  I was willing to be used however he wished.  His response that morning was that I was to simply do what I do every day….nothing more was necessary. He said, “I will bring them to you.” Thinking back on that morning, that prayer, and what I felt the Lord say in response,  I laugh.   For many years now, God has brought women to me who were in crisis, who needed to know God more closely, who desired to be discipled by someone just as I had.  He has taught me a lot about hearing the pleas of their hearts and guiding them to him through their questions and cries, and discerning when they are not yet ready, praying for them, and consecrating them to the next teacher.   There have been days when I watched in awe as the Holy Spirit arose in a woman’s life and she began to respond to God with gratitude and joy.  It makes me understand a little bit of what the angels must feel….the awe when a new believer is born.  In the healthcare role I had in my first career, in my work in bringing medical information through pharmaceutical companies, in working with women with addiction and mental health challenges, I have come to identify part of my role in Christian education and counseling as a “spiritual midwife”…..helping bring a new spiritual being from the womb to the world!