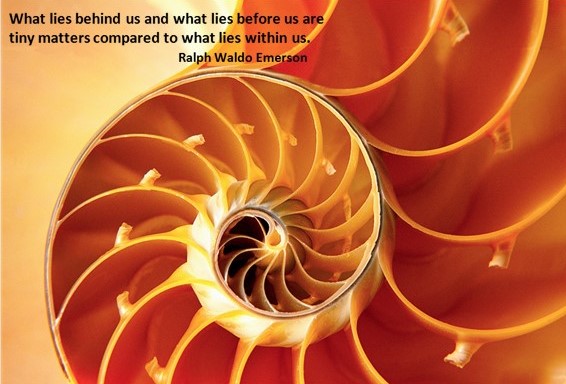 We can only walk through the doorways that are open, but in the houses that we build, all doorways are open. And if we build them according to the Master’s plan they will be open to others, as well.

John 14:2
In my Father’s house are many mansions: if it were not so, I would have told you. I go to prepare a place for you.

Closing the Door to the Past- by Ron Hutchcraft

When I was a kid, “Nautilus” was Captain Nemo’s submarine in a Jules Verne novel. I knew that because (No, I didn’t read it.) Walt Disney put it on TV. Then “Nautilus” became the name of an early nuclear submarine launched by the United States. But not too long ago I saw a nautilus while we were at Ocean City, New Jersey. It wasn’t a submarine. It was the original nautilus; the little sea creature with the fascinating shell. We actually saw a lot of nautilus shells in little shops. We bought one for our living room. It’s real smooth on the outside, got stripes on it, and it’s bigger than my hand. Now, to me, the nautilus shell is shaped sort of like a big, shiny human ear, and maybe we could say it’s like an unborn child in the womb, if you can picture that. The original inhabitant is gone, of course, but his fascinating shell-house remains. When you cut a nautilus shell in half, it reveals the life story of the one-time inhabitant. At the center is this circular chamber with a wall around it. That was the original home of a little bitty nautilus. There are circular chambers all the way to the outer edge of the shell, and each chamber is a little larger than the previous one. That little sea creature kept outgrowing his shell, so he left it behind and moved on to the next chamber-and chapter-of his life.

We’ve got a lesson to learn from that little sea creature. He knows how to close the door on the old chapters of his life and move on to a whole new chapter. For someone listening today, some of those old chapters still define a lot of who you are today; the past hurts, the past failures, the past mistakes, the past sins. Don’t you wish you could do what that nautilus does and just build a wall that closes the door on the old you and enables you to grow into the new, improved you? The bad news is you can’t. The good news is Jesus can. He’s been doing it for people for 2,000 years. He’s done it for me. He can do it for you.

It’s the promise of 2 Corinthians 5:17, which is our word for today from the Word of God. “If anyone is in Christ, he is a new creation; the old has gone, the new has come!” See, something miraculous happens when you go from being “outside of Christ” to “inside Christ.” The guilt of the old is erased, and you no longer have to be defined by the darkness of the past. He makes possible a fresh start, a clean slate, a new beginning.

That’s why God says to us in Isaiah 43: “Forget the former things; do not dwell on the past. See, I am doing a new thing! Now it springs up; do you not perceive it? I, even I, am He who blots out your transgressions and remembers your sins no more.” Whoa! What an awesome possibility! The blotting out of every sin of your past! No religion can do that for you because no religion can pay the spiritual death penalty for your sin. It took nothing less than the brutal death of Jesus Christ on the cross for you. You did the sinning but Jesus did the dying so He could build a wall between you and the darkness of your past and move you into a life that revolves around Him; a forgiven life. A life lined up with the purpose for which you were created.
But you have to be “in Christ” for that miracle to happen. Not in church, but in Christ. You can be in Christianity and still not be in Christ. What brings you into belonging to Jesus? You enter in by a step of life-changing faith. You admit the sin of your life to Jesus, you let Him know you don’t want to live this way anymore, and then you tell Him, “Jesus, I’m pinning all my hopes on your death for me on the cross and your resurrection from the dead. Jesus, beginning today, I’m yours.” And the Bible says at that point you will be “in Christ” and you will be His “new creation.”

You ready for that?

The Bible says “the old is gone; the new has come!” You’re on the edge of that miracle right now. So, let today be the day of your new beginning!