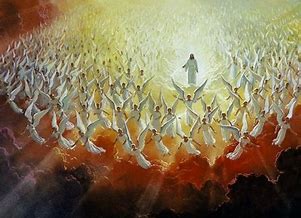 On Sunday, September 8, 2019, during communion time, as I prayed I had a vision of me bowing before the throne of God, one among billions in white robes with the light of the glory of God shining down on us all. It was warm and comforting and I felt connected to the scene. It was a holy moment of feeling lifted up into the heavenlies. Tears slid down my cheeks and I felt God’s love flow over me as I sat there after having taken communion and just enjoyed the time of being with him. It was only a minute or two but it was enough to just feel the feeling of being in his Presence and feeling loved by him. Then it faded. We stood to sing the Doxology. Worship was over and I came home wrapped in the glow of having been with the Lord. The memory of it came back to me again and again through the week. I carried the knowledge of God’s Presence and love with me all week every time I thought about it.

The next Sunday, September 15,as we approached communion, I hoped I might revisit that feeling. I was sitting just a few rows from the front. As we stood to take communion, the worship team was playing “Be Thou My Vision.” Brad Burke was playing a small bagpipe. As I took communion and returned to my seat these were the words I heard:

High King of heaven, my victory won,
may I reach heaven’s joys, O bright heav’n’s Sun!
Heart of my own heart, whatever befall,
still be my vision, O Ruler of all.

I sat down, returned to prayer, and thanked God again for being present in his glory among us and for the vision of being in the heavenlies among the saints before his throne. Tears again flowed for the balance of the communion time and I felt him enfold me in his Presence.

How I love the way God comes to us in communion and makes his Presence known in the taking of the elements, in the music, by his Holy Spirit, as we pray! There’s really nothing mystical or magical about it. In my experience, it is simply a matter of preparing one’s heart and being earnest in prayer, desiring to be with the Lord during worship. He is there and is certainly willing to make himself known.

A friend with whom I had talked by phone earlier in the week and with whom I share a particular affinity for love of the Holy Word had come up to me before the service and said something about shining our light today. We smiled and agreed that we were both there to let the light of Christ shine through us in the service.

Some would say I worship more in the style of an Eastern Orthodox tradition than a United Methodist, longing that it would be a joining in of all the earthly and heavenly hosts with God in a celebration of all that is holy……. Bringing all that our combined presences can to make the time a special moment that will bless God, not just us. I like to think that at least some of us were conscious of having accomplished that today. Amen.