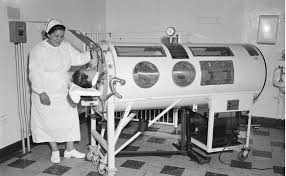 Long time business friend of my husband, John Rogers, writes a weekly Saturday FB post that celebrates many of the events experienced by members of our generation. This week’s is about the polio vaccine, an event that I remember quite vividly, in part because of the fear that so many felt from knowing one or more people who had suffered from polio. His posts often lead one to consider how our lives have become better in some ways or how, at other times, they remind us of what we have lost through “progress.”

Harvard’s Dr. Steven Pinker has written about the immense improvements in human living conditions that are now happening with amazing speed almost everywhere in the world in his new book, Enlightenment Now.

Some around us are “Chicken Littles” who see only doom, gloom, disaster, and anxiety-laden life circumstances. As one meme has said, “if you see the glass as always half-empty, pour it in a smaller glass and quit whining!” I prefer to say, “It matters not at all whether the glass is half-full or half-empty. What is important is that there is a God who loves us and provides for us. The glass can always be refilled!”

John Rogers:
IT’S SADDY!! (Saturday…down South!) In the long ago, and still not far enough away….a summer curse was feared by families every day. No matter where you went, or where you’d go, you’d hear of someone who had fallen victim to polio. It seemed to make little difference as to your station in life. News of another polio victim would cut like a knife. Some didn’t survive; some who did were totally impaired. It was fortunate for all that everybody cared. Every Summer was a time that was filled with fear; when someone had polio, did you dare go near? Yes, folks did care and they showed it well. They’d do all they could…to care for those who fell. Then, finally, fortunately for all, along came Dr. Jonas Salk. When it came to research on polio, he certainly didn’t balk! His invention of the first polio vaccine…was one of the greatest inventions we’d ever seen!! When enough of the vaccine was available, it was made available to all. We’d stand in lines in civic centers, churches, and even union halls. You were given a cube of sugar with the vaccine placed within. There was no pain of an injection….another reason to grin! Finally, no longer was there an annual reason to live afraid. Now, if we just had a cure for cancer and heart disease, we’d all have it made!!