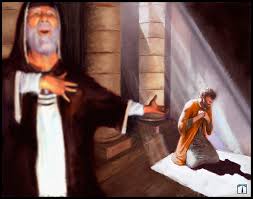 “Falling and getting back up because The Lord chastens after one of his is one thing but spiritual posing is another.”

This is an interesting comment this week by a person who is doing some deep work in spiritual journeying. It points to an understanding of Jesus’ story of the Pharisee and the publican and their respective prayers.

Luke 18:9-14 New American Standard Bible (NASB)
The Pharisee and the Publican
9 And He also told this parable to some people who trusted in themselves that they were righteous, and viewed others with contempt: 10 “Two men went up into the temple to pray, one a Pharisee and the other a tax collector. 11 The Pharisee stood and was praying this to himself: ‘God, I thank You that I am not like other people: swindlers, unjust, adulterers, or even like this tax collector. 12 I fast twice a week; I pay tithes of all that I get.’ 13 But the tax collector, standing some distance away, was even unwilling to lift up his eyes to heaven, but was beating his breast, saying, ‘God, be merciful to me, the sinner!’ 14 I tell you, this man went to his house justified rather than the other; for everyone who exalts himself will be humbled, but he who humbles himself will be exalted.”

While it is a caution to pray humbly, it is deeper than that. It is a call to be scrupulously honest about our own human condition of sinfulness. While the Pharisee focuses on the letter of the law and his “righteousness” in doing the right things, note that his prayer is basically a prayer of self-justification and is prayed “to himself.” The brokenness of the publican in recognizing his sinfulness reveals his knowledge of his true nature and inability to earn his way to righteousness. Which has the real relationship with God?

With regard to the posture in prayer of these two individuals, I am reminded of Pastor Craig Carter’s preaching in recent weeks on posture in worship.  Last week is was on bowing down in prayer.  This past Sunday it was on lifting our hands in praise.  In Sunday’s sermon he told how long it took him to overcome his own pride, rebellion, and self-consciousness about his reputation to actually lift his hands up in praise and worship of God.  Today as I read my morning devotional that same subject has been presented to me by Jill Carattini writing about prayer as rebellion or resignation:

I have always loved that theologian David Wells refers to prayer as “rebelling against the status quo.”(1) No doubt the feisty among us have eyes that light up at the thought. To rebel against the status quo in this light is to challenge life where it has resigned itself to something less, to bring about rebirth and reformation where life or faith have grown stale.
Others may wonder what Christianity, and specifically Christian prayer, has to do with rebellion at all. The candid lyrics of a haunting song speak of Jesus Christ as a man of love and strength, but a man very much separated from everything we see and experience today. The lyrics sing of his living only inside our prayers, and come to the conclusion that while what Christ was may have indeed been beautiful, a man of the past can offer nothing at all for the here and now of real and wearying pain. The sentiment reflects a sorely honest philosophy that many have of the world today: It is what it is. And it won’t change anything to worry about it. Prayer, within such an imagination, is useless. The here and now of suffering is untouchable.
From headline to headline we find the weariness of life and the problem of a dark world screaming at us. Many have grown to see it as an unchangeable reality. But if we have come to terms with the world as it is, it is only because we have come to refuse thinking about how it could be, or how it was supposed to be, or how we could even have an idea that something is wrong in the first place. It is not that we are unconscious of the injustice, suffering, and even evil around us, but that we feel utterly powerless to do anything about it. Still others among us optimistically call for the abolishing of poverty or the end of trafficking or the stopping of whatever cause they are presently championing. While their efforts are needed, the end they call for doesn’t seem to ever occur.
It is to such a soul that Christianity speaks. While other worldviews and religions build into their theorems and theologies explanations for why and how this world “is what it is,” Christianity reverses the statement. Every prophet, every motley lineage, every action of Jesus, and movement of the divine, holds forth the declaration: This is not the way it’s supposed to be!

Prayer, in this sense, is rebelling against the status quo of a world going awry. It is refusing to come to terms with an unjust, dark and evil world, as if it were all we were meant to have, as if there was no one or nothing that could change it; prayer is standing in the light of a God who comes in flesh to say otherwise. But in so doing, prayer remembers not only that the world as we find it can be changed and that it should be changed. The significant piece for the abolitionist to remember is that while I am not going to be the one who brings an end to the world’s suffering, there is indeed one who is. It is at his feet, even in our weariness, where we want to sit.
Jesus instructed his followers to pray, “Father in heaven, hallowed be your name, your kingdom come, your will be done, on earth as it is in heaven” (Matthew 6:9,10). In prayer we stand in rebellion against a world that is not hallowing the name of God, a world not looking for signs of the kingdom, a world wholly uninterested in doing the will of anyone but self. The nature of prayer as Christ taught us is a persistent posture toward God as sovereign, an undeterred vision of what the kingdom is, can, and ought to be, a vision of what God intended for all of creation.
As the psalmist prayed:
Hear my voice when I call, O LORD;
be merciful to me and answer me.
My heart says of you, ‘Seek his face!’
Your face, LORD, I will seek.
The Christian seeks the face of God not to escape reality but to find it, to stand before the sovereign in his kingdom with all that is here and now—with pain and sickness, with goodness and mercy, with all that is unjust and corrupt, and all that is right and beautiful. In prayer, the Christian stands with the one who so loved creation that he joined us within it—in every painful sense of what that would mean for him. The rebellious vision of human flourishing was the very prayer he fought to embody for us—even unto the last rebellion of death itself. Here and now and also coming, on earth as it is in heaven, his is the kingdom and the power and the glory forever.