Life today is so much more peaceful, calm, and joy-filled than it was a year ago and in the 4 years prior to that. So many life changes converged in that season of my life, from the time of the start of our home addition and my Father’s death in 2013 to the end of my pursuit of deacon orders in The UMC last June. I could not adapt to all of the changes, losses, and challenges at once. My resilience was less than I had realized. I remembered, however, another similar time in my life as I approached 40, 20 years ago, when I went through a similar transition. That was a period of several years, as well, which, when it was over left me in a much better place. Today I am also in a much better place than when it all began at age 59. I have heard it said that, statistically, most people go through a major life challenge….. losses, challenges, reorientations of their worldview, relationships, or other status about every 10 years. I can see that pattern in my life and point to specific, memorable periods that had a profound impact on me at ages 9,19, 29, 39, and 59. I got a reprieve in my late 40’s I, guess! Or rather, that period was simply 3 years later, at 52 ,and was much shorter duration. There was also a greater measure of personal agency and choice in that transitional period! One consistent aspect of each decade’s stage, however, was this…..God was there!

From the time of my 20’s I had tended to view periods of my life as climbing up a circular stairway.  I kept experiencing similar things again and again, it seemed.  And each time I did, I would see the experience more as a discrete learning “turn” on the stairway,  many aspects the same, but seeing it from a higher level and with greater visibility beyond and below.  I asked God more than once, “How many more times do I have to go around this circle and through these things?”

I organized a women’s retreat a number of years ago and used shells as the theme…..One of the shells used in the theme was the Chambered Nautilus.  I had heard Joni Eareckson Tada give a radio message on it’s lesson and it registered in my spirit immediately.  So, maybe the spiral stairway was not the imagery God was building into my life, but the Chambered Nautilus…..Maybe our lives finally grow to the point that God’s purpose within us has the elbow room and maneuverability that it was always intended to have!  Maybe it’s not the case that one has to repeat and repeat the same lessons at higher and higher levels, but that one continues building the same chamber larger and larger until it fits God’s intended purpose.  And eventually we outbuild and outgrow this natural realm altogether! 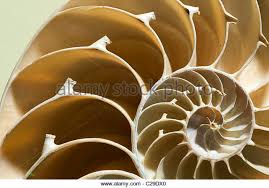 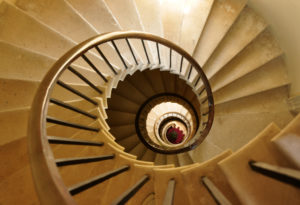 High View of a Spiral Stairway

This is the ship of pearl, which, poets feign,
Sails the unshadowed main,—
The venturous bark that flings
On the sweet summer wind its purpled wings
In gulfs enchanted, where the Siren sings,
And coral reefs lie bare,
Where the cold sea-maids rise to sun their streaming hair.

Its webs of living gauze no more unfurl;
Wrecked is the ship of pearl!
And every chambered cell,
Where its dim dreaming life was wont to dwell,
As the frail tenant shaped his growing shell,
Before thee lies revealed,—
Its irised ceiling rent, its sunless crypt unsealed!

Year after year beheld the silent toil
That spread his lustrous coil;
Still, as the spiral grew,
He left the past year’s dwelling for the new,
Stole with soft step its shining archway through,
Built up its idle door,
Stretched in his last-found home, and knew the old no more.

Thanks for the heavenly message brought by thee,
Child of the wandering sea,
Cast from her lap, forlorn!
From thy dead lips a clearer note is born
Than ever Triton blew from wreathèd horn!
While on mine ear it rings,
Through the deep caves of thought I hear a voice that sings:—

Build thee more stately mansions, O my soul,
As the swift seasons roll!
Leave thy low-vaulted past!
Let each new temple, nobler than the last,
Shut thee from heaven with a dome more vast,
Till thou at length art free,
Leaving thine outgrown shell by life’s unresting sea!